Am Bratach Sith or The Fairy Flag of Dunvegan Castle is the most treasured possession of the MacLeod clan. Legend has it that this sacred banner has miraculous powers. When unfurled in battle, the clan would invariably snatch victory from the jaws of defeat.

There are many tales of the flag’s origin but the one the MacLeod clan chooses to believe is this:

Once upon a time the MacLeod chief, Iain Cair, stumbled upon a fairy dwelling where he met a fairy princess. The two fell in love, married, and had a child. But after a year in the mortal world, the fairy princess had to return to Fairyland. After promising his wife never to let their child cry, the laird did just that. Hearing her son’s cries from the fairy world, the fairy princess returned to her son, wrapped him in a fairy shawl, and sang him a fairy lullaby. Years later, the child told his father that the shawl his mother had given him had magical powers. That magic could be used at a time of great need, but only three times, before the flag, and the flagbearer would return to the fairy world.

The Fairy Flag and the legends surrounding it are woven into the storyline of The Return of the Heir. 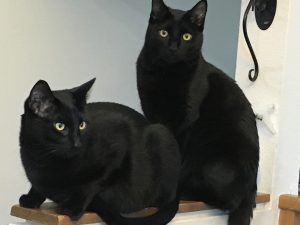 I am the owner of four black cats. Or do they own me? I’m never quite sure. Pictured here are Indy and Tye, two brothers we adopted three years ago. In A Temptress In Tartan, a black cat is mistaken as a witch’s familiar.  In the sixteenth century, it was largely believed that  black cats were affiliated with evil because they are  nocturnal and roam at night. They were thought to be supernatural servants of witches, or even witches themselves.
In celebration of my release, I wanted to share a little of the folklore surrounding black cats. Depending on the location and century in which one lived, black cats either symbolized good or bad luck.
In 16th-century Italy, people believed that if someone was sick, he or she would die if a black cat lay on the bed. Today, in Asia and the United Kingdom, a black cat is considered lucky. In Yorkshire, England, it may be lucky to own a black cat, but it’s unlucky to have one cross your path. Completely opposite of that in North America, it’s considered bad luck if a black cat crosses your path, and good luck if a white cat crosses your path.
Other beliefs about black cats that exist around the world today are:
Black cats have played a major role in folklore, superstition, and mythology for centuries. Today they are most closely associated with Halloween and used in costuming, decor, and as a party theme.
What do you believe? Lucky or unlucky?

I always think it’s fun to find out where writers get ideas for their books . . . that one thing that makes them pause and ask the question, “What if . . .?” That’s what happened to me while passing through Edinburgh Castle’s esplanade. I came upon a bronze plaque and a fountain featuring… END_OF_DOCUMENT_TOKEN_TO_BE_REPLACED

Did you know that Saturday is National Tartan Day?  So what is Tartan Day, you ask?  It’s a day that commemorates the signing of the Scottish Declaration of Independence—a day when Scotland finally won their independence from England after centuries of war. National Tartan Day has been celebrated in Canada for many years, and in… END_OF_DOCUMENT_TOKEN_TO_BE_REPLACED