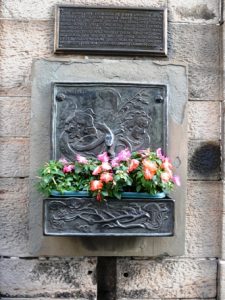 I always think it’s fun to find out where writers get ideas for their books . . . that one thing that makes them pause and ask the question, “What if . . .?” That’s what happened to me while passing through Edinburgh Castle’s esplanade. I came upon a bronze plaque and a fountain featuring two women’s faces—one old, one young—a foxglove plant in the center, and a snake coiled around it all.

The Witches’ Well was placed there in 1894 to commemorate all the women who were burned at the stake between the 15th and 18th centuries. Above the fountain a plaque read: This fountain designed by John Duncan RSA is near the site on which many witches were burned at the stake. The wicked head and serene head signify that some used their exceptional knowledge for evil purposes while other were misunderstood and wished their kind nothing but good. The serpent has the dual significance of evil and of wisdom. The foxglove spray further emphasizes the dual purpose of many common objects. (Foxglove can be used medicinally but it can also be poisonous depending on the dosage.)

Even though I was surrounded by the magnificence of Edinburgh Castle, I spent the rest of the day thinking about the men and women who were accused of witchcraft, and I had to know more. Many hours of research later, the All the King’s Men series was born. There are seven books in the series. The first three books are scheduled for release as follows: