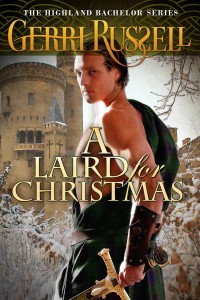 A Laird for Christmas is loosely based on the hit TV series The Bachelorette. Though I must admit that I have never watched an episode of The Bachelor or The Bachelorette, I found the high concept of the show fascinating. I started thinking about women over the ages and how they approached finding that special someone to spend their life with. Women, especially in the time periods in which I write, did not always have the freedom to marry for love. Quite the opposite really, usually women were married to someone else in a business relationship born out of the need or desire for property, financial gain, or political alliance. Or in a less civilized manner, but just as effective at securing a bride was when men raided other villages for wives. Women did not have much say in the matter of marriage, and rarely was love involved in these matches.

But being the hopeless romantic that I am, I always want to find better outcomes for the characters in my stories. Yes, they still have tragedy, misery, and dark secrets in their lives, but the ultimate reward is…love. To me, the notion of true love’s kiss is really important in life and in fiction. Love is often the vulnerability of the bad guys in my books. They can’t love. The good guys win because they are capable of love. They can depend on each other. They trust each other. Love is the reward for the ultimate moral behavior. If love is putting someone else’s needs above your own then that is the ultimate. The ultimate magic that the good guy wields. It is something we are all capable of and it brings out the best in us.

In A Laird for Christmas you are introduced to six heroes who are all worthy of Lady Jane Lennox’s love, but only one of them can win her heart. But never fear, each one of the heroes, Nicholas, Hollister, Jules, Colin, David, and Bryce will find their own true love in the end.

I hope you enjoy the first story in The Highland Bachelors series.