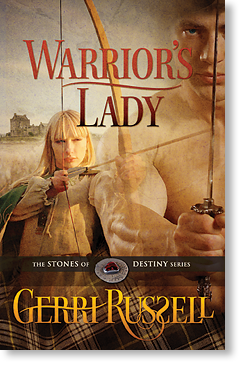 Book Three In The Stones Of Destiny Series

Camden Lockhart vowed to eliminate the Ruthven clan after they had destroyed his family. All he had left was a small niece and the legacy of the Charm Stone she carried, but no one knew where they little girl was. Rhiannon Ruthven came to the abbey to escape the brutality of her brothers and find solace. Instead she found the orphaned Violet Lockhart in need of an escort to her uncle’s castle. Rhiannon didn’t know it, but she would be walking straight into a nest of assassins. Watching Rhiannon nearly sacrifice her own life to save another’s, Camden knew he could not condemn her to death. He’d have to protect her from the very men he’d hired to kill her. Scottish legend said the Charm Stone had the power to heal, but was it strong enough to unite two wounded hearts?

Buy it now at: Amazon and Barnes & Noble

I set the story of Warrior’s Lady around a famous Scottish amulet called the Lee Penny. For the purposes of the story, I renamed the amulet The Charm Stone.

The Lee Penny was obtained by the Locard family during the Crusades in 1330. After the death of Robert the Bruce, king of Scotland in 1329, his friend Lord James of Douglas set out to take the dead king’s heart to the Holy Land, making the pilgrimage that the king was not able to undertake in his lifetime.

While making their way through Spain, Douglas and his band of knights battled with the Saracens. Douglas died on the battlefield, but the king’s heart in its silver casket was rescued by Sir Simon Locard of Lee, who brought it back to Scotland for burial. After that event, the family changed their clan name to Lockhart to reflect the service they had done for their king.

It was during this same battle that Sir Simon Locard imprisoned a wealthy emir. The emir’s aged mother came to pay his ransom, and in the course of counting out the money, a pebble inserted in a coin fell out of the lady’s purse. She was in such a hurry to retrieve it that the Scottish knight realized it must be valuable and insisted that the amulet be added to the ransom. The lady reluctantly agreed and explained what virtues the stone possessed.

The stone was a medical talisman believed to drive away fever and stop bleeding. The amulet was used frequently in the same manner described in the book, according to tradition. In 1629 the Lee Penny helped cure sick oxen, but as a result a young woman was burned at the stake for witchcraft for using the stone. There are records of an accusation of witchcraft against Sir Thomas Lockhart during the Reformation, but the Church Synod at Glasgow merely reproved Sir Thomas and advised him to cease using the Stone.

During the reign of Charles I, the citizens of Newcastle, England requested the use of the Lee Penny to cure a cattle plague. In order to guarantee the stone’s return, Sir James Lockhart required a bond of 6,000 pounds. The penny was used, and the plague abated.

Many cures for both animals and humans, directly related to the use of the Lee Penny, are recorded through the middle of the nineteenth century.

The Lee Penny is the most widely know of all the Scottish amulets thanks to Sir Walter Scott’s The Talisman that also features the mystical stone.

“The passion and vibrant excitement of the Middle Ages glows on every page of Russell’s latest thrilling, emotionally captivating romance, book three in her Stones of Destiny trilogy.” — RT BOOKreviews

“Warrior’s Lady is heart-melting passion, a powerful story of hate turning to love and being able to trust again. This tale brought a tear to my eye and a pang to my heart as I flipped the pages. Warrior’s Lady is definitely a book that historical readers will love.” — Fresh Fiction

“Gerri Russell is an author for the Medieval lover who cherishes both history and the mythical, magical medieval world.” — Merrimon Reviews

“An exciting fast-moving story with interesting characters, Warrior’s Lady is an absorbing and intense tale of greed and dark deeds . . . Reader are sure to enjoy the romantic and enthralling story.” — Romance Reviews Today

Rhiannon and the others rode through the iron gate of Lee Castle as the light painted the horizon a deep scarlet. The first of the stars winked overhead and the ground reflected the creeping shadows of dusk.

Rhiannon’s body ached from an untold number of bruises she’d no doubt received when she’d been slammed against the sides of the cart, and her temples throbbed in rhythm with the beat of her heart.

As they progressed through the bailey toward the keep, Lord Lockhart’s mood darkened until it matched the impending nightfall.

The castle servants streamed from the door, lining up along the bottom of the stairs to the keep as if following some ritual of greeting their lord upon his return. It was something that had never happened at her father’s country house.

Lord Lockhart reined to a stop before them and dismounted. An older woman, most likely his chatelaine, stepped up to his horse to receive Violet who had fallen asleep on their journey. “Place her in the blue room, and prepare the crimson room for our other guest.”

The woman assessed Rhiannon without a hint of friendliness in her gray eyes.

Rhiannon held her head high, refusing to let the woman see how intimidated she was beneath her hard stare. The once fashionable gray traveling gown Rhiannon wore was covered with splatters of mud beneath the wings of a light woolen cape. Her hair was pulled back from her face and protected by a muslin cap trimmed with lace. The small gray hat that used to cover the cap had been lost at some point during the wild journey here.

Rhiannon dropped her gaze to her hands–her bare, work-roughened hands. She would have worn gloves had she had them, as a proper lady should. But when had she ever been a proper lady? Rhiannon swallowed thickly, certain at any moment the woman would send her away.

“Thank you, Mistress Faulkner. That will be all,” Lord Lockhart’s voice broke thorough the uncomfortable silence that had fallen over those assembled in the courtyard.

Without speaking a word, the woman nodded, then slipped up the stairs with Violet tucked safely in her arms.

“Milord,” an older man said in a tight voice. He stepped forward from those gathered.

“Bertie,” Lord Lockhart’s dark mood faded, and a smile brightened his face. “You are looking much improved. Your injuries worried me when we left–”

“How could you?” the man interrupted.

“How could you bring that woman into this castle in anything but irons?”

Rhiannon felt her face pale beneath the older man’s glare. Her breath stilled in her chest and the world around her wavered.

“How could you bring a Ruthven into this castle?”

“What do you mean, a Ruthven,” Lord Lockhart erupted.

Bertie’s eyes narrowed as he pointed at Rhiannon. “The lass is a Ruthven. Although she is fair where her kin are mostly dark, you can see it in her eyes, and in her chin. A Ruthven stands before us, by all that is holy.”

Lord Lockhart’s light, penetrating gaze shifted to her. “Correct the man if he is wrong,” he demanded, striding toward her. He unceremoniously gripped her ankle and yanked her from her horse, imprisoning her in his arms before she could tumble to the ground.

Rhiannon caught her breath and stared up at him.

“Explain yourself.” He pulled her against the hard contours of his body. His eyes demanded her full attention, insisted on the truth. She was only dimly aware that the others had closed in around them as though protecting their master from some unknown threat. Her heartbeat thrummed in her ears. He held her too close, demanded too much.

“Are you suddenly mute? Or does your silence damn you?” he asked, his voice cracking with anger.

Rhiannon jerked out of his grasp. She took several halting steps back, creating some distance from him, but still penned in by the others.

“I am Rhiannon Ruthven.”

Lord Lockhart stared at her for a long, taut moment. Bewilderment flared in the depth of his gaze. “A female Ruthven?”

Rhiannon straightened beneath his regard. “The last.”

“But a Ruthven nevertheless.”

She tightened her jaw, prepared for the onslaught of insults that were certain to follow her acknowledgment.

“The abbess knew who you were, and still she entrusted you with Lady Violet’s care?” His voice was low and deceptively silky.

“Not all people judge others by their name alone.”

He seized her arm and pulled her tight against him once more.

She gasped and tried to break free, but to no avail.

“Some people deserve such judgment.” He yanked her across the courtyard. His people scattered as he approached, then fell in behind him, their curiosity evident.

They came to a halt in the churchyard, before several freshly turned graves. He released her for a moment and drew the sword from his back.

Rhiannon flinched back as he drove the blade not into her, but into the ground at her feet. “Is that your family’s crest upon that sword?”

She swallowed roughly as she recognized her father’s sword. “Aye.”

“All of these men died at the hands of your kin.” Before the horrific image could sink into her soul, he grasped her arm and jerked her to the right, to stand before the freshly turned soil of another grave. Beside that grave lay a body, wrapped in sheets of linen.

He pulled her down to her knees beside the concealed body. “I have every right to judge you, and any Ruthven, by name alone when it is your family who has murdered my own.” Kneeling beside her, he grasped her chin, forcing her gaze to the fresh grave. “My brother was disemboweled by your brother.”

“And this,” he said, forcing her chin toward the wrapped body. With his free hand, he pulled back the white cloth to reveal the even whiter face of a female whose face was frozen as though in a mask of pain bored into her own, accusing her, damning her, as Lord Lockhart did. “This is my sister-in-law, Lady Violet’s mother, who was left unprotected because of your kin’s actions. In the absence of anyone to defend her, she was charged with witchcraft and hanged.”

Rhiannon squeezed her eyes shut, blocking the sight of such horror from her vision, but the images would stay with her always. The pain and desperation she could hear in Lord Lockhart’s words would haunt her all of her days.

And his treatment of her . . . A sob escaped her. Would she never be free of abuse? Her father? Her brothers? This man? “Milord, I am sorry for your loss.” She brought her gaze back to his. His face hardened to a mask of freezing rage.

Beneath the chill of his scrutiny, Rhiannon continued. “That my kin had any part in either of their deaths grieves me most desperately.” She stood, praying her legs would support her. “But I am not my family, milord.” She nearly crumpled to the ground once more at the icy hatred mirrored in his eyes.

“Regardless of my name, I have been appointed Lady Violet’s nursemaid by Mother Agnes. Until a suitable replacement can be found, I must remain here with Lady Violet as instructed by the abbess.”

His contemptuous gaze raked her.

“That girl has already lost everything. Don’t take me away from her as well.” With all the courage she could muster, Rhiannon straightened and met his hard gaze. “Hate me, milord. Despise my family, but don’t make Lady Violet suffer for it.”