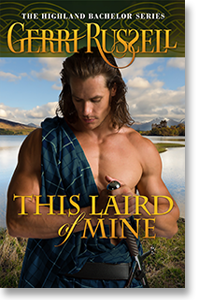 Claire Elliot has two weeks to win the heart of Jules MacIntyre—and then break it. To save her wards from a vicious blackmailer, she dares to enter the laird’s castle, claiming to be the wife he’d recently wed. But no such wife exists!

The brooding Jules invented a bride to silence his well-meaning, matchmaking friends, so he never expected her to arrive on his doorstep. He is suspicious of this beautiful stranger, but he’s also steadfast, courageous, and effortlessly seductive. In fact, he’s the very man Claire would choose to love . . . if she weren’t forced to betray him.

She is an intruder at best, and a liar at worst, but still Claire enthralls Jules like no woman before. He agrees to let her stay—at least until he uncovers the truth—and soon she is filling his manor and scarred heart with the warmth they have both been lacking.

While an unknown enemy has chosen Claire as a weapon to destroy the laird, Jules vows to fight for the passion he has found with his fantasy bride made flesh.

“Gerri Russell once again creates a dynamic romantic tension between two noble characters whose story is sure to capture any reader’s heart.” — Karen Harbaugh, Bestselling Author

“Gerri Russell’s pen cuts sharper than the swords about which she writes. A beautiful period piece entwined with enough romance to keep the readers clamoring for more. One of the best authors working in the genre today, Russell has crafted another winner. ” —Christopher Alan, Author of Hollow

“I love Scottish Highland books, and Gerri Russell’s This Laird of Mine makes me love them even more. I enjoyed the twists and turns as Claire and Jules fought their attraction and fell in love with each other in spite of so much working against them.” — Ann Charles, Author of the Deadwood series

“This was a wonderful read, full of rich characters and vivid history. In the end you will be moved as Ms. Russell once again leaves you with a journey that has run the gambit of every emotion.” — Leslie Miller, Amazon

“Greetings, my dearest friends,” an unfamiliar voice called from the doorway behind her.

Claire stiffened, forced her chin up, and slowly turned around to see the man who was her husband. Conversation moved around her as the newly dubbed laird of Kildare Manor greeted his friends. Claire saw their smiles and heard the joy in their voices as they reunited until all sound faded, and all she heard was the sound of her own heartbeat as it filled her ears. She waited. She watched. She couldn’t take her eyes off him and hoped no one else noticed the fact that he would wait to greet his “wife” last.

But those moments with his friends gave her time to appraise him. She wasn’t sure what she expected, never having seen even a portrait of him, but it wasn’t the handsome man before her. His wavy blond hair fell to the collar of his coat. He was much taller than she expected, and his body though relaxed still hinted at lithe power. His jaw was strong and defined, his cheekbones high, and he had a slight cleft in his chin. Her gaze drifted to his lips—lips that were full and expressive and made for kissing. The thought warmed her cheeks as she met his startling blue eyes.

Those eyes narrowed on her. “My dear, sweet wife.” His voice was rough-smooth with the hint of a Scottish burr. His gaze shuttered as he came toward her. Only a slight curl to his upper lip indicated his current disposition. He was angry, but he would not reveal that to his friends. Only to her.

The air between them all but crackled as he took a final step closer. He leaned toward her, slid his arm about her waist and pulled her forward, caging her against his body.

Her nerves flicked and her fantasy of having him wrap her in his arms and accept her without question shattered about her feet. This close to him, the scent of soap and mint filled her senses. She could feel the tension thrumming through his body, see the challenge in his eyes.

“Jules.” She didn’t press back or retreat. She held her body erect and tried to force a look of nonchalance into her gaze. He studied her eyes, her lips. Against her will her lips parted.

“Oh, how I have missed you,” he said. His voice lowered to a gravelly purr as his gaze fixed on her mouth.

“I’ve missed you, as well, my dearest husband.” The words rang with outright challenge as she met his gaze, dared him to reveal that they had never met. His grip at her waist softened as he pulled her close and lowered his lips to hers.

She knew it was part of the role she’d been forced to play—that he would have to touch her and she would have no choice but to allow it, yet the brush of his lips to hers sparked not only anger, but a surprising stir of passion, and that angered her more. Why had the solicitor and his cloaked comrades forced her into this situation?

The girls. Yes, her wards were her life, and all that mattered to her. And still … she had wanted a life of her own someday. She had wanted to choose her own husband. Instead, the decision had been ripped from her. And she was now Jules’s property in order to save the only three people who ever cared about her.

With a flash of temper, Claire brought her hand up to Jules’s face, smoothed her fingers against his jaw. She wanted to push him away. Instead she tunneled her fingers into the hair at his nape and across his neck, pulling him closer.

He responded with a soft groan that only fueled her pent-up irritation. She put her anger, her frustration, and her fear into her kiss. It felt good to let her emotions loose, to focus all her energy on the one thing that had driven her to this place. If he wanted a kiss, she would give the man, who no doubt had had many kisses before, one more that he would not soon forget.

She put everything she had, everything she was, into that kiss, and he responded. He wrapped his arms about her and hauled her against his chest. His lips firmed, he tilted his head, and his kiss deepened. He was now in charge. His kiss was fierce and hot as he ravaged her mouth.

Claire couldn’t think, couldn’t move as the scent of mint once again invaded her senses. Never in her life had she ever felt anything like his mouth on hers. Her nerves fired at the feel of his hard body against hers. Indescribable need and desire infused her core, potent and real. And she wanted to lose herself in that torment.

She gasped at the thought and jerked out of his arms. What was she thinking? What was she doing? The man was used to seducing vulnerable women.

“Darling,” she said, breathless. “We have guests.” She studied his profile. There was something compelling about his face, something she couldn’t tear her gaze from. In his eyes she saw not anger and vengeance, but a sense of purpose that sent a chill to her core.

“We understand,” Hollister said, pulling Margaret close to his side. “It was not long ago that we were newlyweds.”

Margaret smiled up at her husband as her hand drifted down to her slightly rounded abdomen. “Look at us now. Married not yet a year and both Jane and I are with child.”

“Now there is an interesting challenge,” Jules said, dryly.

Claire’s heart thudded in her chest at the prospect of Jules getting her pregnant. Why hadn’t she considered that before now?

Oblivious to her sudden terror, Jules turned toward the others, releasing her from his gaze. “My apologies. I forgot my manners. I was eager to greet my new wife properly. Each time I see her, it feels as though I am looking at her for the very first time.”

Claire forced a smile as she tried to recover not only from his bold words, but from that devastating kiss. She could not afford to lose her head over one moment of seduction. She had to remain in charge and guide his emotions where she wanted them to go, not the other way around.

But one thing was clear. Her husband would not here and now challenge her claim, at least not in front of his friends. Instead, he would taunt and torment her until she revealed her purpose.

Steel infused her spine. Let him try. She would instead mold him to her needs and desires until he proclaimed his love for her. Then the girls would be freed. Claire frowned as another thought occurred to her. What happened after he fell in love with her? She had not thought to ask the dark-cloaked and masked kidnappers who had invaded her life. It was one more thing she should have thought about before agreeing to their terms. Why had she not?

She knew the answer even as the question formed—because until this moment, Jules had been just a faceless entity, an end to a means. If she did what they asked, then Penelope, Anna, and Eloise would be safe.

At least that was what they had promised.