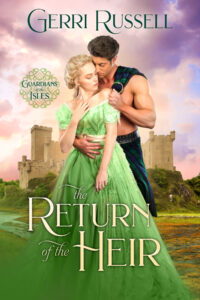 Book One: The Guardians of the Isles Series

It’s a clan feud, a war with destiny, and a dusting of magic…
As the first-born triplet and heir of the MacLeod clan, Alastair MacLeod has always known he would return to Dunvegan Castle and succeed his father as Guardian of the Isles. He’s honed his battle skills since his betrothed left him at the altar, stole a precious artifact, and presumably died. Called by his brother, Alastair reluctantly returns home with his soldiers. As he beholds the ghost of Gwendolyn in the tower, his worst nightmare has come true—Gwendolyn’s ghost intends to haunt him.
To save her family’s lives, Gwendolyn Harris was forced by a rival clan to steal the legendary Fairy Flag and leave Alastair behind. She and her siblings have been locked in the haunted tower for five years, kept alive only to play a ghost while the rival clan plans for war.
When Alastair returns, all Gwendolyn wants is to bury herself in his strong embrace. But his presence at Dunvegan means his life is in jeopardy, and Gwendolyn will do anything to keep him safe.

All I can say is wow about Gerri Russell’s new “Guardian of the Isles” series is absolutely brilliant! It weaves my two favorite ingredients for reading a Scottish historical novel which is true Scottish history with a spectacular fictional story that swept me off my feet. This is one of my favorite reads for 2022. I absolutely and unequivocally highly recommend this extraordinary novel that readers do not want to miss! It is that spectacular and a complete masterpiece in my humble opinion. –Tartan Book Reviews

The Return of the Heir held me captive, and I didn’t want to go to work.  When the book seems to be slowing down, the next moment something sparks the action again.  Every time I would think I knew where the story was going, you threw a curve ball at me.  An awesome story and I can’t wait for the next one!!  –Christy, Amazon Review

The Return of the Heir is the first book in the Guardians of the Isles series. Many elements of Russell’s work that readers have come to know and love are present: Her signature historical research and deep character development are present as are new elements. You’ll find a fun folklore piece and a hint of fairy magic and ghosts adding a magical component that is not to be missed! –Kathy, Amazon Review

“What a thrilling read! I highly recommend this to Scottish fans everywhere or anyone who loves a well-written historical romance.”–PW Reader, Amazon Review

Alastair heard a clattering sound, followed by a second softer thud, then a thunderous crash and footsteps heading away from the kitchen and towards the servants’ hall.

“Should I follow the footsteps, while you see what all the racket was about?” Graeme asked.

“Aye,” Alastair replied as he moved towards the old kitchen. Heart pounding, he raced through the semidarkness. At the entrance to the old kitchen, he came to a halt at the image of his mother standing in the doorway. She signalled with her hand that he should follow her inside the wine cellar. A soft iridescent glow coming from his mother’s form lit the chamber, enough for him to make out the slim silhouette of another woman standing beside a barrel of wine.

When Gwendolyn saw him, she gasped.

Alastair swallowed thickly. Was she real this time or another illusion? For years he’d imagined her like this, standing so close before him, ready to apologize for abandoning him. But she’d always been a figment of his imagination. The only thing that had been real was his desire to see her again.

He took two steps towards her and hesitantly reached for her face.

She shuddered but did not step away.

Her breath caught as he made contact with her exposed flesh. Gwendolyn’s skin was cold beneath the warmth of his touch, but solid. Still needing more proof, he slid his fingers along her jawline towards her neck. Then he felt it: the gentle thudding of her heart against his fingertips. A strange shiver sped through his body. She was alive. She was before him.

She looked past him, towards the Grey Lady. “You promised.”

I am protecting you. His mother’s words filled his mind.

Had she promised Gwendolyn something? In a flash of white light, his mother vanished from the chamber, leaving him and Gwendolyn alone.

Gwendolyn brought her gaze back to his. In her eyes Alastair saw an aching, deep-seated despair. He knew that look. He’d experienced the emotions that came with it when his father had forced him and his brothers to leave their mother in the dungeon to die.

He shook off the memory. Gwendolyn was alive and needed his help. Her arms were behind her back instead of settled at her side. Further observation revealed she was bound with ropes. “Turn around so that I might free you of your bonds.”

She nodded and turned, holding her arms slightly away from her ill-fitting gown as he reached for his dagger and sliced through the rope. It fell to the ground between them.

She turned around and massaged her abused wrists as her gaze met his once more. “Thank you for freeing me,” she said, her voice trembling with emotion.

“It’s going to be all right, Gwendolyn. Your brother and sister are safe. You are safe.” He started to reach for her hand only to pull it back against his side.

She looked away, pretending not to notice. “Take me to them and we shall leave.”

“Leave? Nay. You cannot leave.” They weren’t going anywhere. Too much still remained unknown, unsaid. But at the sudden look of terror in her eyes, he forced himself to relax and tried to soften his tone. “Garrick MacDonald still hunts you. And your sister has not yet regained her strength. I am sure all of you are weak and in need of nourishment, at the very least.”

“I cannot say for certain, but she is very weak, and I fear she became excessively chilled in the tower. I’ve sent for the healer in the village to attend both your sister and brother.”

“Aye. Follow me.” Alastair turned and headed back to the old kitchen. He kept looking over his shoulder to make certain Gwendolyn was still there. This time, she was real. This time he wanted to make certain she stayed at Dunvegan, at least for a while. Once they reached the door to the outside, Alastair headed for the new keep.

“What about Garrick?” Gwendolyn asked, her breathing stilted. When Alastair realised she must be every bit as weak as her siblings, he slowed his pace.

“My men and I will search the entire castle once I know you are safely settled with your brother and sister.”

At the doorway to the keep, she paused and turned to look about her in the darkness. Her eyes filled with wonder and a satisfied smile came to her lips.

An emotion he’d never felt before came over him as he watched her, her face tipped up in the moonlight. It made his knees weaken and his throat close up. His toes and fingers tingled as though feeling warmth for the first time since he’d left his home many years ago. He could say nothing, do nothing but watch her.