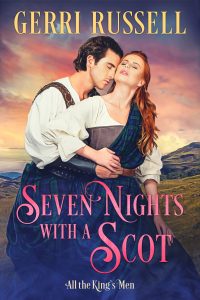 Book One In The All The King’s Men Series

As witch hunt fervor sweeps across Scotland, it is even more challenging for Vivian Sinclair to hide her gifts of precognition and healing—and more dangerous. Her guardian, King James, betroths Vivian to one of his most loyal warriors thinking the powerful Douglas clan can keep her safe, but when Quinn Douglas arrives to take Vivian to his twin brother as a bride, he barely thwarts a mob calling to burn the witch. He rescues Vivian, and they begin the perilous journey to her new home.

When a powerful man wants Vivian dead, their escape across Scotland, placing Quinn and Vivian in daily peril, is besieged by the attraction sizzling between them. With each day and each mile, he finds himself falling more deeply in love with his twin’s betrothed. He cannot betray his brother, and he’s pledged to serve his king, but Quinn cannot imagine letting Vivian go.

“History and romance capture the extraordinary drama of the North Berwick witch trials.”

“Gerri Russell pens another masterpiece from start to finish. Seven Nights with a Scot is a riveting, fast paced, action-packed, nail-biting adventure, with sexual tension, treachery, passion, and love. The setting was breathtaking, dialogue was brilliant, and the plotting was phenomenal, plus characters that are both awe inspiring and unforgettable. A book many readers will want to read again and again. A definite for your keeper shelf.”  –Tartan Book Reviews

“A fantastic start to a new series. I absolutely devoured this book and couldn’t put it down.” –Niki, Goodreads

“With so many Scottish historical out there it is hard to find one with a fresh approach, but this book certainly has that. I loved it.” –Shelagh, Goodreads

“This was a very exciting read, with lots of action, suspense, sexual tension and a very evil villain. I enjoyed the fast-paced flow of the book, especially the end, when there are several nail-biting moments, unexpected twists, and an ending that must be read to be believed.” –Tracy, Goodreads

“I wanted more than only seven nights with the Scot! So hot. So engrossing. I loved the character development and felt completely engrossed in their journey. I was rooting for them the whole time. The writing was beautifully descriptive which made me feel as if I was on the journey with them. I whole-heartedly recommend this book!” –Bookseller, NetGalley

“Do you think Rupert and his men can have followed us here?” Vivian asked.

“Nay,” Quinn said with conviction. “No one unfamiliar with the descending path would dare, especially at night. Rupert is dangerous, but he’s no fool.”

“I agree,” Moreis added. “We’re safe fer now, but once we cross through Stirling toward Glasgow we had best be prepared.”

“We can all sleep with ease tonight. The fire will keep the animals away.” Lachlan stood then stretched with a yawn. “Now that my belly is full, I’m going to finally get some sleep.”

Gillis joined him, gathering the now empty bowls. “I’ll clean the dishes in the loch then head to sleep myself.”

Moreis stood and grabbed the dish beside Vivian to add to his own. “I’ll help ye,” he said. And, after giving Vivian and Quinn a speaking glance, he followed Gillis, leaving them alone.

Quinn’s thoughts returned to their earlier conversation about Redhouse Castle. Vivian’s body was still stiff and her face emotionless since their earlier discussion. “Are you upset that your new home will not be as grand as those you’ve lived in before?”

She turned toward him, eyes overbright. “Where I live matters not as long as I am happy.”

“And do you imagine you can be happy in East Lothian with my brother?” His stomach clenched. Sudden tension made his shoulders tight. Not for the first time did he wish things could be different for both of them.

“I realize I am being unfair, for I haven’t met your brother yet, but the closer we get to the end of our journey, the more fearful I become.”

She shook her head briefly. “Mostly of what could happen between now and our arrival, with Rupert . . . with those hunting me . . . the witch trials . . . with you.”

He shoved his hands through his hair. “We are friends, Vivian. That’s all we can be.”

She lowered her gaze, shielding her response from him.

“Perhaps we should call it a night.” He rose to his feet, backing away from the fire. What in Hades was wrong with him? She had wanted something more from him tonight and he was walking away.

She is your brother’s bride.

He reached out to grasp the trunk of a tree with one hand. His fingers dug at the bark until a ripple of pain went through him. He welcomed it as a distraction from another maddening ache.

“Good night then.” Sorrow echoed in her tone. She was still for a moment before she stood and headed toward the loch.

Quinn stared after her. Even though he shouldn’t, he wanted her. He wasn’t sure at what point he had become aware he wanted her. That first day when he’d helped her to her feet after Odin had nearly trampled her?

Aye, he had wanted her then. His palm had tingled as it had touched the silky softness of her skin. Even then, he had tried to dismiss her effect upon him. He had to remember why he sought her and what his duty was. Yet never had his duty been this difficult to uphold.

Freed from the firelight, moonlight painted her in shades of silver and blue. As she walked she released the pins from her hair, allowing her long tresses to cascade down her back. The burnished red locks shimmered as she walked. The sight of her made him want to reach out and— “Where are you going?”

She turned back toward him. “You said yourself we’d be safe from Rupert tonight so I am going to bathe in the loch.”

“Not by yourself, you’re not.”

“Moreis and Gillis are there. I will send Moreis back and keep Gillis with me.” Vivian turned and left him, vanishing into the dark.

In all his years of warring alongside his brother, Quinn had always managed to shape events the way he wished them to go through strategy and diligence. And yet, where Vivian was concerned nothing had proceeded as planned.

They would spend four more days and nights together. They would no doubt be the four most torturous of his life.