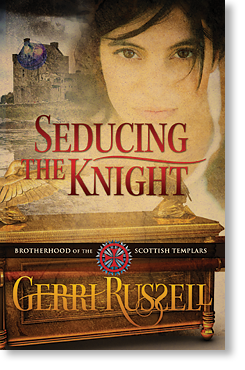 Book Two In The Brotherhood Of The Scottish Templars Series

A princess in hiding…

A Templar knight bound by duty but burning with desire…

A search for the legendary Ark of the Covenant…

Their journey will take them thousands of miles—from the deserts in the cradle of civilization to the misty heathered Highlands of Scotland. Along the way they will face storms, treachery, and an army of assassins. But for these two who thrive on adventure, the greatest risk of all is abandoning themselves to the pleasures they find in each other’s arms.

The cover of Seducing the Knight, designed by Visual Quill, received the ShelfBuzz Seal of Excellence.

The Prophecy of Jessamine

In Seducing the Knight, the second book in the Brotherhood of the Scottish Templars series, Sir Alan Cathcart was tasked by King Robert the Bruce to find and retrieve the legendary Ark of the Covenant from the Holy Land. His mission was to be completed based on the information in two letters sent to the Scottish Templars by one of their own knights revealing where he hid the Ark after the siege on Tyre, a Templar fortress in the Holy Land.

While these letters contained essential information, they were cryptic in case they fell into enemy hands. Sir Alan’s task to decipher the letters and find the Ark would prove nearly impossible without a little help. And who better to help our hero than the heroine of the story.

Princess Jessamine, of the houses of Castile and Burundi, was the child of a Spanish mother and a Moorish father, both of royal families. At Jessamine’s birth she was visited by a seeress who predicted the young girl would have a special place in this world. The seeress gifted Jessamine with the following prophesy.

The prophecy rises when the turban and the cross come together in blood. Then shall a night of white and the Holy water of a deep, blue sea reveal the things you cannot see.

Thunder and lightning, a cloud upon the mount, and the voice of the trumpet shall call out loud. Only without sight will you know what is real and bring to the world the hidden seal.

On the Mountain of God all shall be revealed when the mists of the cloud and the devouring fire meet. Day into night and night into day, a whisper of I Am That I Am will pave the way.

The Fate of the parents will not be yours as a sacrifice heralds the start of a new war.

Yet when has adversity ever stopped a hero or heroine from finding their true calling? It is that very need to discover the truth of the prophesy that drove Jessamine into Alan’s arms in the pages of Seducing the Knight. Armed with Alan’s Templar letters and Jessamine’s prophecy, they venture forth to discover one of the most sacred artifacts the world has ever known, the Ark of the Covenant.

“Action and wildly exhilarating adventure propel the second book of the Brotherhood of the Scottish Templars series forward. Russell packs the pages of the Indiana-Jones-meets-Lara-Croft tale with nonstop action.” — RT BOOKReviews

“This is the second in the Brotherhood of the Scottish Templars series and Russell has her work cut out for her. I love the change of scene to the lands around the Mediterranean and the introduction of the paranormal. This creates a whole new aspect and brings out the power of the biblical elements. The love story between Jessamine and Sir Alan is almost secondary to the power of the Ark. A good story for Russell fans.” — Fresh Fiction Reviews

“Russell transports our hero and heroine across vivid locales spanning Spain, the Holy Land, and Scotland – as only an adventure of these epic proportions deserves. The combination of such vibrant descriptions of the environs, a fast-paced storyline, and the quintessential quest for the Ark of the Covenant makes for a very quick and pleasant read.” — Romance Junkies

From Chapter 13: The hero and heroine’s search for the Ark of the Covenant takes them into dangerous territory.

Jessamine stilled as she felt the earth tremble for a heartbeat beneath her feet. A flash of lightning streaked through the silver-gray sky. Fear tightened her throat. Then Alan was there beside her. He slipped his arm around her waist, drawing her close.

“What is it?” he asked. “Does the lightning scare you?”

She shook her head. “Do you not feel the ground tremble?”

“Then what?” A frown creased his brow as he searched the area around them.

“I don’t know. I just felt something.” She drew a sharp breath as the earth trembled again. This time his eyes widened as the earth shook.

“Jessamine, the third stanza of the prophecy. Tell me.”

She recited the familiar words. “‘On the Mountain of God all shall be revealed when the mists of the cloud and the devouring fire meet. Day into night and night into day, a whisper of I Am That I Am will pave the way.’”

His gaze shot to the sky. “Day into night and night into day. We have to keep going.” He took her hand and guided her up the incline as another blue streak illuminated the sky.

“Isn’t it dangerous? What about the light?”

“The prophecy seems to indicate that we need to be on this mountain when the storm breaks.”

“I know.” He laughed. “Perhaps you are starting to have an influence on me.” They picked their way gingerly across a patch of rough rocks.

Couldn’t he have felt her influence somewhere safe? Jessamine ducked her head as the wind picked up and tossed her long hair about her face and tugged at her clothing like tiny invisible fingers trying to hold her back.

Was it a warning?

“What if we don’t find the Ark of the Covenant?” she asked.

“We’ll find it. We have to.” He sounded far more confident than she felt at the moment.

“We’ll find it,” Jessamine whispered, trying to convince herself of that truth. She’d trusted the prophecy to get them this far. She had to have faith. Her lungs burned and her legs trembled with exhaustion when they finally reached the summit. As they crested a ridge, another streak of light flared in the night sky and a thunderous boom sounded all around them.

Jessamine flinched and nearly lost her footing until Alan’s arm steadied her. In that brief flash of light, she saw the open-air temple before them. Tall walls arranged in a rectangle were cut from the solid stone. Rows of benches, also cut from the rock, faced a central altar with steps leading up to it.

The sky went dark. Jessamine frowned, wanting to see more of the temple complex. “Why is it so dark?”

“There are forces other than simple nature at work here, I fear.” He flashed her a confident smile. “This is the temple we’ve been searching for. Here we are in the presence of God, if all my research is correct.”

To be in the presence of the Almighty was more than a little daunting. “How will we find the ark without any light?”

“The prophecy seems to want us here during this storm. We need to trust that whatever forces brought us here will keep us safe until all is revealed.”

The wind picked up again and another flash of light ripped the darkness right beside her. A startled cry escaped her, to be silenced a heartbeat later by a thunderous crash. The hair on Jessamine’s arms stood up as an odd sensation filled the air around them.

“Come with me.” Alan took her arm. He pulled her toward one of the temple’s high stone walls that stood near the altar.

At his words, the wind swirled around them, drawing with it the heat of the day. Alan removed his saddlebag and set it at the edge of the altar, then sat down and leaned against the wall. He motioned beside him. “If the prophecy wants us here in the temple during the storm, let’s cooperate.”

She sat and leaned into him. Her heart accelerated as he pulled her closer with an arm around her waist. His gaze fixed intently on her face.

With the flashes of light, she could see him clearly one moment, but he disappeared into shadow the next. She trembled as another flash of light brightened the sky.

“We’ve been on this quest for five days,” he shouted over the wind and thunder. “I know next to nothing about you.”

Her heart stumbled. “What are you asking?”

“Anything you want to tell me. Your favorite scent. The most beautiful thing you’ve ever seen. About your family.” He grinned. “Anything at all.”

She flattened her hands against the rough fabric of her dress. Was it time to tell him the truth? They were too far into the journey for him to take her back to her royal family. But was that the real reason she’d kept her identity secret?

If she was honest with herself, her reluctance to tell the truth stemmed more from fear of the way he’d treat her if he knew who she was. She stared down at the large, capable hand at her waist. Would he talk to her so openly, or treat her as his equal, or touch her in the same way once he knew?

She would never know unless she took the chance and trusted him with her secrets. Yet the words would not form. Experience had taught her that people did treat her differently. Once they knew who she was, people kept her at a distance.

She didn’t want that, not here with him. She wanted to be just another female who was free to decide the course of her own life. Someone who could listen to her heart and follow its call. Tears formed in her eyes and she turned her face away.

What had he asked, her favorite scent? She swiped at her eyes, then leaned back and drew a slow, deep breath of musk and sandalwood. Her eyes drifted closed. He was her favorite scent, but she couldn’t tell him that. She opened her eyes. “I love the smell of cinnamon.” Her voice sounded raw. Perhaps he wouldn’t notice. “I don’t think I’ve yet encountered the most beautiful sight in the world. And my family…” She paused. “They meddle too much.”

He drew her more tightly against him, and despite the storm’s song she heard his soft laughter. “Meddling isn’t bad. It sounds as if you are loved. Be grateful for that.”

“I am,” she replied, but she wanted something her birth denied her. Maybe it was a mistake to want it…and maybe it was unfair to want it from him, a man dedicated to logic and war and the divine.

She looked at the sky. Again, the lightning flashed. Was it her desire for freedom that brought them here to this moment on the mountaintop? Or was it fate that had led them to Mount Sinai?

She preferred to think that fate was in charge—or at least some force outside herself. She cast a sideways glance at Alan. Warmth stirred within her. She became acutely conscious of his hand at her waist. Of the cool sandstone beneath her. The tang of metal lingering in the air after each burst of light. The moon that hung low in the night sky and threaded Alan’s hair with streaks of silver.

His gaze met hers.

The wind kicked up again, caressing her face and throat with cooling fingers, pressing her gown against her breasts. Her nipples grew taut. She sucked in a startled breath at the sensation.

He could sense her desire. She scrambled to her feet. Sitting beside him was every bit as dangerous as the lightning overhead.