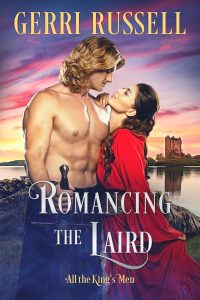 Book Two In The All The King’s Men Series

With her sister facing the gallows, she risks it all… even her heart
Legendary Scottish laird and warrior Reid Douglas has never met his match on or off the battlefield until Lucy Livingston – his bride-to-be. Lucy is no meek maiden content to stay at home. She’s trained in the art of war and is determined to destroy the king Reid has vowed to protect with his life.

Lucy doesn’t want to wed the handsome, brawny laird, but it is an excellent cover she can use to get close to the king, who is engaged in a campaign to rid Scotland of witches. Lucy must protect her sister from enemies who know an accusation of witchcraft, no matter how tenuous, is a death sentence.

They should be sworn enemies. But Lucy can’t deny the sparks that fly whenever she vies with her husband in and out of their bedroom. And Reid finds his wife’s spirit intoxicating – making him long for more than war. Can two opposing warriors find peace in each other’s arms?

“Whoa! Talk about a kick ass heroine! For once, the spotlight is on the heroine instead of the hero! In this case, shine that light on Lucy Livingston – a jack of all trades and this time a master of everything!” –Victoria, NetGalley

“This is one of the best action adventure romances I have ever read.” –E. Davis, BookBub

“I absolutely loved Romancing the Laird. Full of intrigue, suspense, and romance–enough to keep reading until I finished without putting it down.” –Robyne, reader

“Ms. Russell does it again and pens another masterpiece that I couldn’t put down! It was definitely a nail biter, yet the romance gave my stomach butterflies too, with a swoon-worthy hero and unconventional, protective heroine!” ~Tartan Book Reviews

Reid stepped through the tower doorway and folded his arms over his chest. He studied Lucy more closely as she performed the intricate steps of a warrior’s routine. Through the sheer fabric of her chemise, he could see the outline of her well-honed muscles in her arms and legs. And while they appeared strong and firm, he also knew them to be as soft and smooth as silk.

He was snagged by the sight of her drawing in a breath with each lift and extension of her staff, then exhaling as her shoulders dipped, bringing the weapon down with forceful control. Her eyes showed no fear, and yet the very air around her seemed to vibrate with regret, remorse, vulnerability.

His chest tightened and he must have made a sound because she snapped toward him, came forward, and brought her quarterstaff around, scooping him off his feet. He hit the stone floor with a startled thud.

She stopped just out of reach. “I did not know it was you. Are you all right?” Her voice was uncertain, hesitant.

“Aye.” He dusted off his bruised pride that he had allowed himself to be so caught up in the moment that she’d taken him down. He stood and faced her. “Why did you leave our bed?”

She clutched her weapon before her as though she might have need of it. “I needed to think.”

“And this is how you think?” She looked so fierce standing there, poised for battle, with her chest rising and falling, her color high. It was then that he saw someone else.

He took a step toward her, narrowing his gaze. “You were there . . . heading toward the king’s tower at Falkland Palace.”

Her staff came up. She looked like a rabbit caught in a trap, wide-eyed and ready to run.

“Was it you?” Tempering his usual reaction to a traitor, he crossed his arms over his chest. “Tell me the truth.”

“There’s nothing to tell.”

“You’re the one who left that night,” she said, her eyes flaring. She paused, drew herself up, and continued, “I married you because the king demanded it. He gave me to you as a spoil of war.”

“That is not what I asked you.” He watched her, feeling a strange tension build in his chest. He wasn’t certain how he wanted her to answer his questions . . . wasn’t sure if he wanted to shake her or kiss her or throw her in the dungeon.

Her eyes filled with angry desperation and fear. “What do you want me to say?”

Aching with frustration, he shoved his hands though his hair. “Did you marry me to gain access to the king?”

“It’s an aye or nay question, Lucy. What is your answer?”

“I married you because of you.”

He frowned. “What does that mean?”

“Why does this have to be so hard? Words always fail me when I am trying to speak from my heart.”

There was a space of silence between them as he assessed the woman before him, trying to determine the truth behind what she did not say. Reid could honestly say he was not displeased to see this side of the woman he had married . . . aside from the fact that she was trying to kill the very man he was sworn to protect. “Why do you want to kill the king?”

“I do not want to kill him. I do not believe in revenge, only justice.”

He shook his head, trying to clear his confusion. “God’s blood, woman, will you not answer a question directly?”

Her fingers were clenched in tight white fists around her staff. Her shoulders and neck were so stiff it looked as if they were made of stone. She appeared as though she were holding something in, something so powerful she was terrified it might break loose.

She watched him with a growing desperation that matched his own. “What will you do to me now that you know it was I at Falkland Palace?”

An insane surge of desire moved though him at the memory of that night. His wife and the midnight warrior were one and the same woman. “Nothing happened. We could put all this behind us if you tell me why . . . Is someone blackmailing you into doing their evil deeds?”

Her hands trembled ever so slightly as she looked away, trying to hide her response to his words. But not before he’d seen yet another flash of fear in her eyes.

He’d hit upon the truth. “Lucy,” he said softly.

“I have much to tell you.” Her voice was raw, and she started shaking. “I’ve been trying to find a way since I arrived.”

He could see the rigid control of her muscles, the tension in her body. “Let me help. What can I do?”

“Nothi—” The word was broken by a choking breath, a sob that she caught before it could fully form. In the next heartbeat she turned to him, her eyes moist with unshed tears. “Fight me.” She lifted her staff.

He understood all too clearly what she was trying to do. She wanted to lose herself in action and pain, because then she wouldn’t have to think or feel the emotions that ravaged her now. “I will not fight you.”

She smacked his thigh with her staff.

“You are a warrior.” Lucy smacked his arm and then his thigh once more. “Draw your sword.”

“Talk to me. What were you going to say?” He could feel the itching rise of welts on his flesh where she had struck him. “I have no wish to harm you, wife.”

“You need not spare me. I can hold my own against you no matter the weapon.”

“You say that without ever having truly fought me.”

She glowered at him. “I promise not to hurt you, husband.”

“As if you could.” Reid suppressed a grin. The conversation they were having was deadly serious, yet she wanted to fight instead of talk. He marveled at the thought. She was so like him. She had a warrior’s heart. In a whisper of sound, he drew his sword.