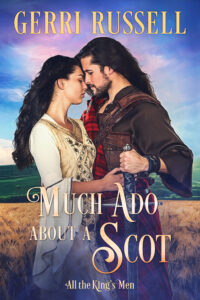 Book Five In The All The King’s Men Series

She needs a husband to secure her lands and her child’s legacy, even if she has to drag one from prison…

Isobel Seton is about to lose everything unless she can convince a man to marry her. Twice widowed, no man in Haddington will say “I do”—until she finds a handsome stranger locked up in the village pillory. She offers to free him in exchange for marriage. He agrees, but with rules: no questions about his past and the marriage will only last two months—not a day longer.

Alexander Godric Ross—one of King James VI’s top soldiers—is undercover and on a mission. He’s to infiltrate a network of spies he believes are helping the king’s nemesis, Lord Bothwell. Aiding Isobel Seton is exactly the cover story he needs. Yet, as the nights pass, Alexander finds himself losing his will, falling for his wife and succumbing to a passionate love affair.

When a mysterious fire destroys her crops and Isobel is arrested for witchcraft, Alexander finds himself facing his most cunning enemy yet as he sets out to save his wife.

“Much Ado About A Scot is another treasure in the All the Kings Men series!” –Kathy, Amazon

“Much Ado About a Scot is a riveting, fast-paced, page-turning, romantic adventure that historical romance readers will love. This story totally touched my soul and will live in my heart forever!”  –Tartan Book Reviews

“Much Ado About a Scot was my favorite book from the whole series. There was just the right amount of sizzle, compelling story and interesting historical details. I really enjoyed the blending of romance, history and a fantastic dose of fantasy.” –Dionne, Amazon

“Xander and Isobel’s story is filled with danger, fear, love, and passion. It is a beautiful story on its own, but also an exciting ending to the series.” –Yvonne, Amazon

“Please—I’ll do anything. Give you whatever you want. Please!” Desperation was sharp on Xander’s tongue as the pillory seemed to tighten about his neck.

Isobel stopped before the sheriff and whispered something to the man before stepping back toward Xander. Her eyes displaying no emotion. “You’ll do anything?” There was a slight hesitation in her voice.

“I will set you free if you agree to marry me.”

His eyes rounded as he tried to find words. Marry her?

The crowd seemed amused by the request. They laughed and taunted him further.

“Take the pillory. At least ye’ll have a chance at escape upon the hour!”

“Why would ye want tae marry a witch?”

Xander frowned. “I can help you in innumerable ways that don’t require marriage.” He cocked his head to look up at her. “Don’t you need some help around your farm?”

Her gaze narrowed on him. “And how would you know that?”

He forced a nonchalant laugh. “Everyone in East Lothian knows of your need for a farmhand to help with the harvest. I can help you. I’m strong. I’m a good worker.”

His explanation seemed to satisfy her, for she relaxed ever so slightly. “Aye, but will you be a good husband?”

His frown returned. “Why is it important that I marry you?”

“You won’t be coming into my home, having access to my child if we are not married.”

He forced himself not to react. A child? How had he not discovered she’d had a child when he’d been gathering information about her? “The wee lad won’t know the difference.”

“But I will,” she said angrily. She looked away momentarily as though ashamed of her heated response. Her words revealed what he had suspected earlier. She was desperate for help.

Xander returned a challenging glance. He wasn’t the desperate one. He needed her cooperation, but not at the price of marriage. “You don’t even know me. Isn’t it better to simply hire me and let me go when the harvest is through?”

“I know enough about you. You drink too much. You steal things you should pay for. But you appear strong, and at this moment I am the one who can release you from your current predicament.” Isobel straightened as a well-muscled man broke through the crowd. He wore a leather apron and carried with him a red-hot iron with a T at the end. The acrid scent of heated metal filled the air.

Xander swallowed roughly as his gaze shot to Rhys. He stood toward the back of the crowd now with his arms folded over his chest as though he too were enjoying the spectacle as it unfolded. Xander narrowed his gaze upon his friend, silently urging the man to do something. Would he let them brand him?

The crowd shifted toward the pillory, eager to watch the blacksmith mete out a punishment befitting a thief.

“Now, let’s see,” the man stopped before Xander, studying first his right hand then his right cheek. “Where should I put the mark? Where you might be able to hide it? Or in plain sight for all to see?”

Xander’s gaze shot back to Isobel’s. Her cool gaze sent an insidious, coiling heat into the pit of his stomach. She looked neither fearful nor amused, but there was something in her expression that burrowed deep inside him. She had made him an offer. One she didn’t intend to alter. She would see him branded a thief before she would change her mind. Or, he could alter his own fate if he simply agreed to her terms.

At his silence, she started to turn away.

“The face it is,” the blacksmith said, lowering the hot iron.

Isobel turned back to him and held up her hand, stopping the blacksmith in his task.

“How about a compromise?” Xander ground out. “We can handfast right here, right now, if that is your wish. That way neither of us is bound to the other permanently if we find we do not suit.” Handfasting was as legally binding in Scotland as a marriage performed by a clergyman but the practice had been discouraged in recent years by clergy who wanted more control over the affairs of their people.

Isobel’s features were expressionless. Xander couldn’t read if she liked the suggestion or not until she finally said, “You’ll stay with us the entire year and a day as required by the handfasting ceremony?”

He leaned toward her so that only she could hear. “Nay. I will give you two months. That is enough time to bring in and sell the harvest.” It would also give him the time he needed to find Bothwell and expose him to the king’s forces.

Her gaze narrowed. “At least there is no pretense about the commitment you are willing to make. I’ll not have you lie to me. Ever. Can you promise me that?”

“Aye, that I can do.” The falsehood burned in his gut, but what else could he do? He needed to keep his observations secret for the sake of his king. “I’ll make one stipulation as well; that you’ll not ask any questions about my past.”

Her eyes widened in surprise. “I can know nothing about you?”

“Only what I choose to tell.” He paused, giving her a moment to consider. “Do we have an accord?”

Isobel’s lips thinned in thought. Silence descended over the crowd as they waited for her response.

She straightened, then instead of looking at Xander, turned to the blacksmith and gave a tight nod. “Handfasting will do.”