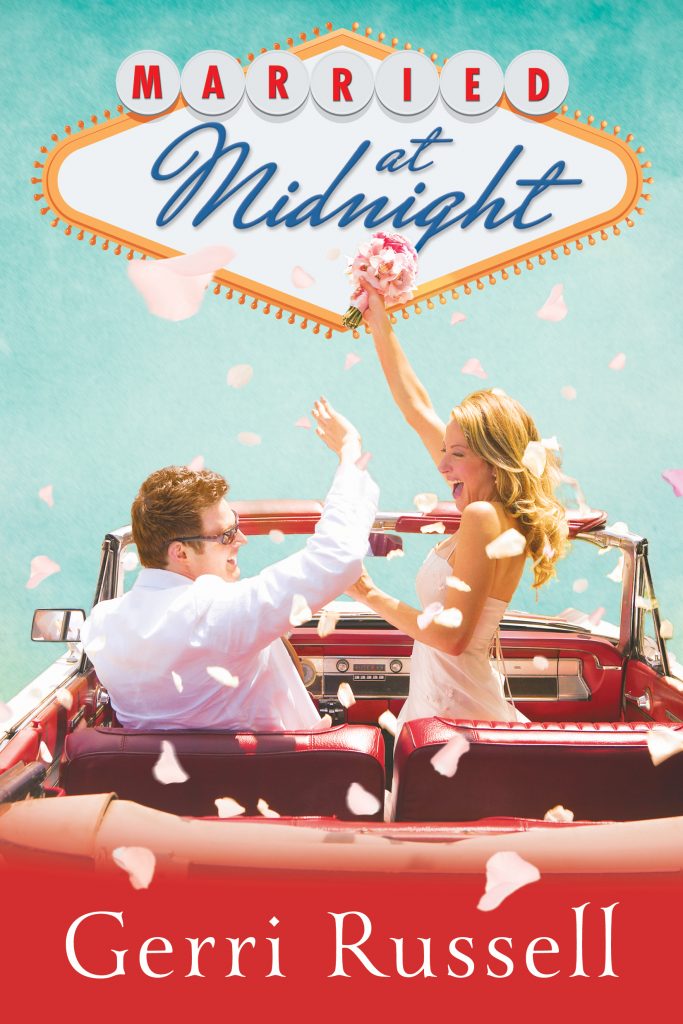 Ellie Hawthorne’s event planning business desperately needs a jolt of life. Determined to drum up leads, she heads to Las Vegas for a trade conference—and has one too many shots of tequila. The next morning, Ellie wakes up with a ring on her finger and a bedfellow who’s also the last person she expected to see again: Connor Grayson, the high school boyfriend who broke her heart.

Connor is in Vegas hoping to secure funds for his self-driving car project. He’s as shocked as Ellie at their accidental marriage. But when he finds out that his beloved grandmother, Viola, has suffered a heart attack, he begs Ellie to keep up the charade—at least until Viola recovers.

Neither of them counted on Viola’s insistence that they take up residence in her Victorian mansion together, or her giving Ellie a job decorating the place for a holiday open house. With a little help from Viola and four elderly Elvis impersonators, can these former sweethearts find lasting love?

“Married at Midnight is a sweet, sassy romance with some humor. A feel-good novel.” –Goodreads

“[Married at Midnight] is a battle of the cupids. It’s a charming, fun read that left me in an uplifted mood.”–Roundtable Reviews

“Married at Midnight was a cute and sweet story.” –Harlequin Junkie

“Gerri Russell captured my heart with the not so obvious twist and turns of this captivating story of love and faith.” –Amazon

Ellie Hawthorne knew she’d done something terribly stupid last night. Just how stupid was the thousand-dollar question. That first shot of tequila had seemed like a good idea given the horrible day she’d had. Looking back, and judging by the pounding in her temples, Ellie was certain the second and third shots had been a mistake. Anything beyond that third shot, she didn’t remember.

What had happened after that? Only snippets of memory played across her mind—dancing with a tall, blond man to a pulsing beat, pink peonies, white lace, Elvis Presley.

Was the memory some weird Vegas-induced fantasy?

Ellie groaned and rolled onto her side, away from the sliver of light stabbing through a separation in the curtains of her Las Vegas hotel room. She’d come to Vegas for an event-planning trade show, where she’d hoped to pick up potential clients for her ailing business.

Ellie Hawthorne Events hadn’t had a long-term client since last spring, when her biggest celebrity wedding ever had canceled. The couple had opted for a homespun wedding instead, kicking off a new trend not only in Seattle but all over the nation. Event planners everywhere were struggling for work. And that reality had led to her first shot of tequila. And, she felt a shiver, maybe some other dumb decisions . . .

Something was knocking on her brain’s back door.

In an attempt to stop the pounding in her head, Ellie pressed her hands against her temples. What had happened last night? She searched for any real memory that might surface. Again, she saw a man. He was handsome and somewhat familiar. He’d picked her up and carried her somewhere . . . nothing more came to her but the relentless throbbing.

Once again that thin streak of light assailed her. Why was the Las Vegas sun brighter than the one in Seattle? It didn’t seem fair, especially with a killer hangover, that the sun should be so cheery.

Ellie groaned against the injustice of it all until that thought led to another. If she wanted to change her situation, she could. She could get up and find the aspirin she’d packed. What was that recipe for hangovers again? An aspirin, orange juice, and a raw egg? Her stomach roiled at the thought. She squeezed her eyes shut, hoping to stave off a wave of nausea. Dry toast sounded better. Maybe that and an aspirin.

Flipping the sheet aside on her king-size bed, she felt an air-conditioned chill settle over her bare skin. Funny, she didn’t remember getting undressed last night. But she didn’t remember coming back to her room either. Pushing herself to keep moving, she opened her eyes, then gasped at the sight of a man’s head lying on the pillow next to hers.

Ellie jerked upright and scrambled out of bed. Her heart thundered in her ears, competing with the pounding in her head. For a moment her stomach pitched, and she thought she might be sick. She clamped her hand over her mouth. The sensation eased, and her eyes adjusted to the partial light.

A tall, blond man—the one from her memories—was very naked and in her bed. His slow, even breathing stopped. He stirred at the garbled sound that had escaped from her before settling back to sleep.

Should she call the front desk and ask for help? She dismissed the thought as quickly as it formed. He was no malicious stranger. Her fragmented memories indicated she’d invited him here.

Ellie forced herself to take a breath, then another as her heartbeat slowed. She reached for the sheet hanging off the edge of the bed. Wrapping the linen around her, she studied the man.

His back was to her, and he’d kicked off the remaining blankets, leaving her a clear view of the well-defined muscles of his back, waist, buttocks, and legs. Whoever he was, he was a sight to behold.

Ellie shook her head at the thought, then regretted the motion. She reached for the nightstand to steady herself. The body and the guy seemed so familiar. Yet no memories of his name or where they’d met came to her. How could she have forgotten such a finely sculpted posterior?

Her hand felt different. She turned her fingers, revealing the back of her left hand, which held the sheet to her body. Her breath hitched on a startled gasp. A big diamond sat atop her third finger.

The world seemed to slow down. A heaviness descended over her, weighing her down as her heartbeat thundered in her ears.

There had to be an explanation. Ellie staggered toward the wall beside her, searching for the light. She flipped the switch and recoiled from the brightness. When her eyes adjusted, she looked again toward the bed. Blond hair lay against the white cotton of the pillow. “Wake up. Whoever you are, wake up!”
The man groaned and twisted onto his back, pulling the blanket with him, covering his lower half. He dragged his arm over his face, shielding his eyes from the light. “Too bright. Turn it off.”

A day’s growth of beard stubbled his square jaw and upper lip, giving him a roguish look that was a little more appealing than she cared to admit. No wonder her drunk self had been attracted to him. Looking farther down, she saw that his chest was broad and chiseled and covered with a smattering of golden hair. The man was definitely something to look at, but she needed to know more. She stepped toward the side of the bed, leaned down, and poked his shoulder.

His arm lifted, exposing his eyes. He gave her a devilish smile that held infinite promise. “Come back to bed. We can talk later.” He patted the empty mattress beside him.

The sight of him rocked her. She hadn’t looked into those dark-green eyes since high school. And that voice . . . her body had always responded to that deep, rich sound. An uncontrollable warmth spread through her. She hadn’t seen him in eleven years. Even so, she could feel her nerves stretching in anticipation.
Never in her wildest dreams had she imagined herself this close to, and certainly not in bed with, the man who’d once broken her heart.

And yet she’d spent the night with him, or at least she thought she had. She vowed in that moment never to drink tequila again.

“Connor Grayson. What are you doing in my bed?”