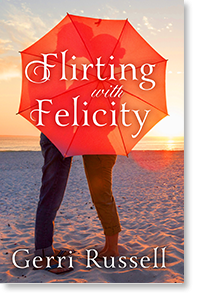 Felicity Wright never expected to inherit the hotel where she works as head chef. But now, she’ll do anything to keep the Bancroft Hotel operating—even if that means mixing it up with the late owner’s handsome nephew, Blake Bancroft. He’s here to challenge her unexpected inheritance of the Bancroft Hotel, and there’s no way either of them are walking away without a fight.

When his uncle wills away his family’s oldest property, Blake Bancroft cooks up a plan to get it back. To check out his competition, he’ll need to check in. Too bad his first encounter with Felicity proves to be anything but smooth. As their battle over ownership begins, things begin to heat up between them—and not just in the kitchen. Their attraction may be a recipe for disaster. Yet with the right ingredients, it could turn into a recipe for love…

If you like your romance served with delectable treats…Geri Russell’s Flirting with Felicity takes the story into the kitchen, with a lovable chef and a relentless billionaire. 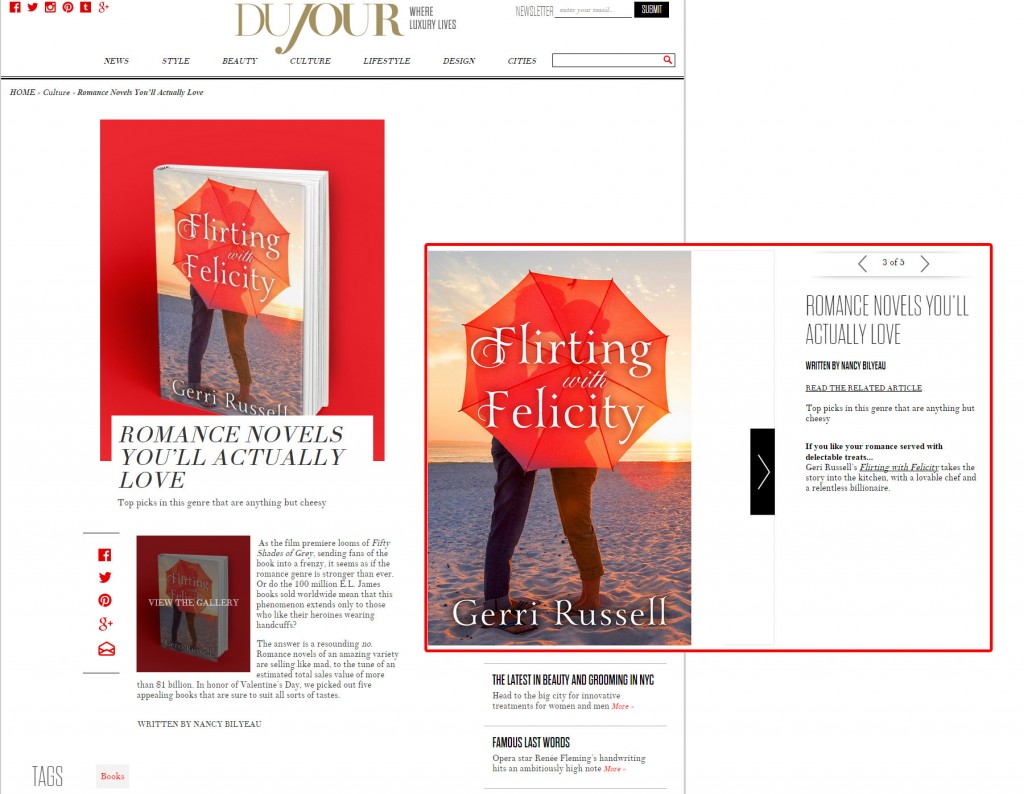 “Finally, I can sleep. I was so wrapped up in this story that I stayed up into the wee hours to get to the ‘happily ever after.’ This was a unique story that made me worry that it might not end as I hoped. Thank you, Gerri, for such a wonderful book.” —Lynda Pharo McDonald, Amazon reader

“This is truly one of the most interesting books I have read in a while. The romance is tender and sweet. The characters are both passionate and knowledgeable about their causes. I was intrigued by the details of the green hotel. I was also very interested in the hungry heart program. So much ‘food’ for thought.” —Terry Twardzik, Amazon reader

“I love this book! [Flirting with Felicity] reminded me that no matter how much money you have, if there is no love, sincere love, nothing in life is worth it.” —Ivonne Varela, Amazon reader

While her crew finished closing down the kitchen, Felicity headed out to check on things in the bar. After eleven, only Michael and Casper would remain on duty to serve a limited menu to the late-night patrons of the bar. However, she always liked to see how busy they were before heading home. The thought brought a smile. Tonight, her journey home would only involve a trip to the second floor. Living in the hotel had its perks.

The cozy leather wingback chairs were filled with Seattleites and visitors just as in days past. She’d learned today that this very room once hosted the Vanderbilts and the Guggenheims upon opening over 105 years ago. The lounge’s signature drinks still welcomed authors, musicians, and artists. At the highly polished mahogany bar, Ryan, her bartender, garnished a Haute Toddy with a cinnamon stick and a lemon twist before setting it on Valerie’s tray to be delivered to one of their guests.

At her approach, Ryan smiled. “Sit yourself down for a minute.”

Felicity slipped into one of the tall wooden chairs at the busy bar and took off her chef’s cap. She smoothed her fingers over her hair, tidying any loose strands back toward her usual ponytail. “Things are hopping tonight.”

He reached behind him for a tall flute and a bottle of champagne. “Nothing we can’t handle.” He filled the flute with bubbly liquid and set it before her.

“A small celebration of your exciting news,” Ryan said with a wide smile. “Not every day a girl inherits a fortune.”

Felicity contemplated the bubbles erupting inside her glass. She ached to talk to someone who would understand the fear and the joy that whispered through her since the reading of Vern’s will. She was tempted to pour out her troubles to the man who had proven more than once what a good listener he was. Instead, she only allowed her fear to take form as a thought: It’s not mine yet. She lifted her glass in a salute. “Cheers.” She took a sip.

“Enjoy, and let me know if I can do anything to help,” he said before moving away to serve another customer.

At this point, she wasn’t sure she could do anything other than trust that she could make Blake see why she so desperately wanted to keep what Vern had given her. She continued to stare down into her glass as the sound of soft, soulful rhythm of Brazilian jazz tried to soothe her.

“Is this seat taken?”

At the sound of Blake’s voice, her heart gave a wild leap. She twisted around to see him.

He stood a few feet behind her, tall and straight. He’d changed out of his suit and into faded blue Levi’s and an expensive-looking gray sweater. If it were possible, he looked even more handsome than he had this morning, despite the loss of his three-thousand-dollar suit.

Great. She’d hoped to look her best the next time they met, not garbed in the most unattractive uniform possible. Her chef’s coat and black pants had always been comforting to her before this moment. “It’s a public place. I can’t stop you from sitting wherever you choose,” she said, trying to recover her balance and ignore the tug of his eyes and voice.

Taking her discouraging words as an invitation, he slid into the seat beside her. “Celebrating?” he asked with a nod at her glass.

She shrugged. “A gift from Ryan,” she said a little breathlessly as she raised her champagne flute and took a sip.

Blake signaled for Ryan. The bartender answered Blake’s summons instantly. “What’ll it be?”

“The same,” he said, motioning to Felicity’s glass.

Ryan turned and filled another flute with champagne. When he returned, he set Blake’s glass before him, then set the bottle between them. “Let me know if you need anything else,” he said before moving away.

She was uncertain why the interaction upset her, but it did. Blake expected service, and people jumped to do his bidding. Well, she wouldn’t be one of those people no matter what his warm, intimate look did to her insides. He could have cocktails all by himself, or with whomever would have him. She had things to do before their day tomorrow.

Felicity moved to stand, but Blake tipped his glass to hers. His eyes glinted with humor and, instead of standing, she found herself settling back into her chair.

“To the next two days together,” he toasted as he leaned forward.

Their gazes held. The moment spilled out, lengthened in an odd way that made her heartbeat speed up. “Yes, and may the best person win.” She’d almost said “man,” before she’d caught herself. She didn’t need to give him any more of an edge, even verbally, than he already had.

Felicity brought her glass up to his with a clink of sound and took a long sip of her champagne as Blake continued to study her. “The first time Dom Pérignon tasted champagne, he said, ‘Come quickly, I am tasting stars.’ It aptly describes champagne, don’t you think?”

He took a sip from his own glass, then set it down. His lips turned up in a lazy, devastating smile. “You have very delicate fingers.”

With slightly shaking fingers, Felicity set down her glass and folded her hands together on the top of the bar. She had delicate fingers? Was he flirting with her? Unsettled by the words, and slightly suspicious of his motives, Felicity stood as the hammering of her heart began again.

“Since you’re down here, want a tour of the kitchen? We’ll be spending lots of time there tomorrow.”

The husky sincerity of his deep voice snatched her breath away.

He drained his glass, set it on the bar, then reached for his wallet.

Felicity stalled his hand before he could remove a bill. “This one’s on me.” Her fingers grazed his skin. At the whisper of a touch, she could feel the tension thrumming through him, felt an answering response within herself.

He smiled, his gaze warm and sensual, as he moved toward her. “Lead the way.”