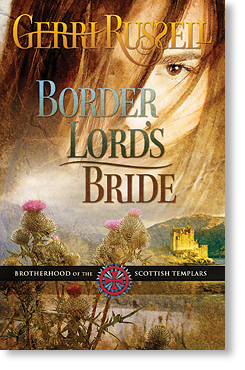 Book Four In The Brotherhood Of The Scottish Templars Series

To protect his sisters from disaster, Lucius Carr leaves the Templar Knights and returns home to his Scottish estate to assume the family’s earldom little expecting to inherit a bride in the bargain. Elizabeth Huntingdon had spurned him once before. She is the last woman on earth he wants to marry, yet the only woman he could ever imagine as the Border Lord’s Bride.

Not every scene makes it into a book. I removed this short scene from Border Lord’s Bride to help with the pacing of the story. However, I always liked this deeper look inside both Elizabeth’s and Marie’s characters, so I’m thrilled to share it with you here.

Elizabeth held back the tide of emotion threatening to swamp her as she followed Marie up the stairs leading from the great hall. They proceeded down the hallway until they came to a stop before an open doorway. “Right ‘ere, milady,” Marie said as she ushered Elizabeth into a pale yellow room.

Not trusting her voice, Elizabeth nodded and stepped inside. Golden candlelight bathed the room in a welcome glow that was so at odds with the ‘leave now’ message she’d received belowstairs. She clutched her hands together, fighting the tears burning her throat.

Marie bustled to the hearth glowing with the embers of an earlier fire. She gathered the glowing coals into a bed warmer, then slid it between the linens. “I’ll have Hadwell bring up yer trunk in a moment. In the meantime, sit by the fire and warm yerself, lass,” she said while moving to plump the pillows on the bed. “It’s happy we are to have ye here.”

The kindness in her voice was more than Elizabeth could bear. The events of the day came rushing back. The pain of knowing there was no way out of this arrangement. Her father’s dismissal. Lucius’s coolness toward her. What sort of future was there for her here?

Deep in her heart she’d hoped when Lucius saw her they could go back to the way things had been before he’d left. What a fool she’d been to think that. Tears slipped past her lashes onto her cheeks. Quickly she batted them away and straightened.

There was no going back. Once Marcus had started responding favorably to her flirtations instead of gathering Lucius’s jealousy, all had been lost. Lucius had vanished and Marcus had remained.

A soft sob escaped her and she pressed a hand to her mouth to hold back any others.

“Och, lass. There’s no need to cry.” Marie was at her side leading her to the chair near the hearth. Once seated, Marie dropped to her knees before Elizabeth. Gentle understanding radiated from the old woman’s face.

Elizabeth batted once more at her tears. “He hates me.”

“There’s a fine line between love and hate, lass.” She patted Elizabeth’s hand. “His head wants ye to leave, but let’s see what tomorrow does to his heart. I don’t believe the master meant to be so harsh with ye. He’s just…” she paused. “He’s as lost and lonely as ye are I imagine. Give the master time. He’ll come to see reason. Of that ye can be assured.”

Elizabeth nodded as Marie’s words sunk in. He’s as lost and lonely as you are.

Marie stood. She squeezed Elizabeth’s shoulder and left the chamber, closing the door softy behind her.

Elizabeth drew a slow breath. Of course Lucius felt unsettled upon his return. He’d lost so much in the past few years—his father, Peter, Marcus, as well as his life with the Templars. He had only the familiarity of his home, and even that would no doubt only bring memories of those he’d lost.

Her own pain slid deeper inside her as her thoughts turned to helping her one-time friend. Forget the fact that they were to be married in four days. He needed a friend now more than he needed a bride. And she knew just what a friend would do for him.

“Set around both a holiday and engagement theme, [this] novella is the perfect way to escape a hectic schedule. Even in a short format [Russell’s] style shines through and charms readers.” —RT Book Reviews

“[The Border Lord’s Bride] is a super fourteenth century Borderlands romance. As always in a Gerri Russell historical, the lead couple is a charming pair while the support cast is powerful, and the deadly Machiavellian villain is hidden in plain sight. Sub-genre readers will appreciate Ms. Russell’s engaging novella as love is not enough when trust does not exist.” –Harriet Klausner

All through the meal Lucius had been conscious of a change in Elizabeth. Something within her had shifted, taken on strength over the years they’d been separated. It bothered him, though he wasn’t sure why.

Her delicate features had become more pronounced over the last five years. As a young girl she’d been attractive, with her wide brown eyes dominating her face. Now, she was a true Scottish beauty. The evening’s candlelight revealed a heart-shaped face with a delicate jaw. Her lips were full and darkly sensual. Her tawny hair was a riot that looked as though it refused to be tamed. For a heartbeat he was glad to be free of his Templar oath of chastity.

Lucius frowned at the thought. Elizabeth might be beautiful, but she was not for him. He set his goblet on the table and rose to his feet. “Miss Huntingdon, Elizabeth, we must talk.”

Elizabeth nodded as she stood, then bade his sisters good night. She drifted toward him, her posture rigid, her chin held high. A pillar of strength in a delicate package. He led her through the hall and into the solar. At the doorway he stopped. This room had always been his father’s private chamber. The furnishings were just as they’d been when Lucius had left. For a moment he forgot all about Elizabeth and drifted into the room.

His father’s desk. His fingers traced the polished surface. Behind the desk stood a shelf filled with the estate’s accounts. To the left of the desk leaned a cane. His father’s favorite. Lucius clamped his jaw against a rising tide of unwanted emotions. The man was gone. As was his brother. The estate and the welfare of his sisters were in his hands now.

She studied her hands, folded neatly in her lap. “In that you are wrong, my lord. My father and your brother have determined our fate. There is no going back.”

“God’s teeth!” Lucius erupted. “You’ll cry off this betrothal at once.”

Her gaze shot to his face. “It is impossible.”

“Why? You don’t care about me. ’Tis Marcus you loved.” She paled ever so slightly, no doubt at the mention of her lost lover.

“You know little of my heart.” She shifted her gaze to a point over his shoulder. “If the marriage does not occur, my father will be ruined.”

He frowned. “How can that be?”

Again her gaze met his, and this time he saw something that hadn’t been there before: fear. “Your family paid my father’s debts. There is no possible way for us to pay you back. And no other future for me.”

He turned away from her and walked behind his father’s desk. His desk now, he amended. “Keep the money. I don’t need it.”

“That cannot be done.”

“’Tis a business arrangement. We shall make another one where you cry off and I make a gift of the funds to your family.”

“If this marriage does not go through, I’ll be destitute,” she said, her voice barely above a whisper.

He hardened his heart to the sweet sound of her voice, which made his every nerve stand on end. “I don’t care what becomes of you, just as you did not care about my feelings that day in the garden when I caught you and Marcus together.”

“You saw what you wanted to see. Marcus surprised me. I did not return his kiss.” She clutched her hands together, yet he noted how her fingers trembled regardless.

“You appeared to be enjoying yourself.”

“I would have stayed away from here forever.”

She brought her gaze to his. “Then why did you come back?”

“Because I care what happens to my sisters.”

“So do I.” She straightened, and all her nervousness vanished. “You might think I have nothing to offer you in this marriage, but I do. I have many connections with the local clans. I can use those connections to help your sisters make agreeable matches. Without such guidance, they will likely end up in miserable situations or not married at all, and become old maids. Is that what you want for them?”

Cold, dark fury ate away at him as he glared at the woman who had fallen for his brother instead of him.

Despite his angry assault, her features softened. “No one asked you if you wanted this, Lucius, I understand that. No one asked me either. Marcus and my father swore to honor the pact. Not us.”

He released a harsh breath. “So what are we to do? How do we undo what others have done?”

“We honor the betrothal.”

“That is not acceptable.”

“You’ve just arrived home. Will you not think on this for even one night? Please, Lucius, I beg of you.”

“Is that why you came tonight instead of tomorrow? To force me into this decision all the sooner?”

Elizabeth paled. “I came because my father made me. As I am of no further use to him, he wanted me gone.”

Lucius frowned. Obviously much had changed between Elizabeth and her father since her mother had died six years ago. “Very well,” he said. “We will leave things as they are for tonight. But in the next four days I will make you see all the reasons this marriage should not go through.” He turned away, thinking he had the last words.

“And I have four days to make you see it should.”