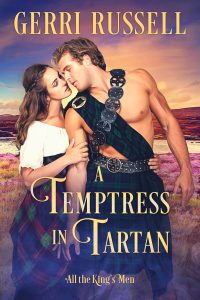 Book Three In The All The King’s Men Series

Can two sworn enemies run from a fate that was thrust upon them…or surrender to each other?

Lachlan Douglas’s hatred for the Ruthvens was born when he was a lad of seven, the day that clan murdered his mother and father. They took everything from him without mercy, leaving him with nothing but a heart of stone. Now, one of King James VI’s mightiest warriors, Lachlan wreaks havoc on enemies of the Scottish crown. When the Ruthvens stir up trouble for the king and the Douglas clan once more, Lachlan faces his greatest opponent yet—a bold, beautiful lass who wants to see him dead at any cost.

When Elizabeth Ruthven finds herself at the royal court to be used as a peace offering between the Ruthven and Douglas clans, she has no interest in marrying her enemy. Elizabeth is determined to continue the family feud, but she isn’t prepared for the brawny, brooding warrior who invades her life—and her heart. He is an infuriating, irresistible opponent with a curious touch, a smoldering kiss, and a reluctant smile that begins to shine on her alone.

As Elizabeth tries to sort out her feeling for her enemy, danger and treachery loom when her clansmen accuse Lachlan of sorcery. In a time when witches are hunted with fanatical zeal, Elizabeth must choose between forgiveness and love, or a chance at revenge at the end of the hangman’s noose.

“Grab a bottle of wine and settle in because A Temptress in Tartan is a wild ride. Once it starts you won’t want to move!” —Tammy, NetGalley

“Gerri Russell absolutely blew me away with this emotional, heartbreaking romance…the setting made my heart race, the dialogue was magnificent, and the characters were so captivating. This book is a total gift from start to finish!”  —Tartan Book Reviews

“A Temptress in Tartan is another triumph in the All the Kings Men series!”  —Kathy, Amazon reviewer

“Mortal enemies, kilts, and witchcraft? Oh my! Russell draws you into her world by creating characters with heart…highly recommended for those who love historical romance and an alpha male with a softer side. ” —Ariel, NetGalley

“What an original, unexpected plot! The romance builds really well and while the book is more sweet than spicy, it is definitely worth the pay off and you come to really love the characters and want them to be together. A gem. ” — Morgan, NetGalley

The candle had long since burnt down and a hazy gray darkness filled the bedchamber. Elizabeth’s hands were shaking as she bent over her husband’s sleeping form. Lachlan slept in his kilt and boots on the floor in front of the door. She tensed when she heard his even breathing falter. Did he sense her presence near him?

A moment later, his slow, even breathing resumed and she released a hitched breath. He was still asleep. Silently, she reached for the sgian-dubh he kept tucked into his boot. She would have only a second to grab the weapon and strike. Her aim for his throat must be true despite the fact she’d never taken a life before.

There was no other choice. She had to do this. This man was her enemy. She reached for the sgian-dubh.

“Touch that and you’ll wish you were dead.” Lachlan’s hand snaked around her wrist before she had even touched the weapon.

Elizabeth’s blood ran cold. She tried to wrench away, but he was too strong. “Let me go.”

“Why?” He held tight as he sat up, watching her with an intensity that made her stomach tighten. “So you can try again to kill me with my own weapon?”

Her blood pounded in her ears. “It’s not what you think.”

“It’s not?” He stood, pulling her up with him. Pain shot through her wrist at the motion. “’Tis obvious to me that you intended to slit my throat. I thought we had moved past all this.”

“You were planning to kill me, so I thought I’d kill you first.”

He stared at her in stunned amazement. “You thought I would kill you? Whatever gave you that idea?”

“How could you not? We are who we are. How can our marriage change anything?” she replied, starting to feel a little light-headed as she locked her knees to keep herself upright.

He turned her in his arms until they fully faced each other. She drew a breath.

As he loosened his grip, he gazed down at her. “Why would I hurt you? You are my wife.”

She stepped back, suddenly noticing the darkness of the bedchamber had given way to the pinkish light of dawn. “We stopped for the night in the middle of nowhere. It would be easy for you to murder me here and hide my body where no one would ever find it.”

Lachlan frowned. “We were forced to stop here because of the wheel. There was nothing sinister in my motives, I assure you. But we cannot continue our journey with this distrust between us.”

Lachlan bent down and withdrew his sgian-dubh from his boot, then he reached for the Bible the king and queen had given them as a gift.

“What are you doing?” Her voice sounded frightened even to her own ears.

He set the Bible on the bed beside them, then with his weapon in his right hand he pierced the palm of his left hand, drawing a thin trickle of blood. “Now give me your left hand.”

She stepped farther away. “I don’t understand.”

“I’ll not live all my days with dread of each other. Swear to God you’ll not kill me or cause my death and I will swear the same to you.”

When she didn’t respond, he stood there, waiting until finally she offered her hand. He held her gently as the knife’s edge bit into her flesh and the warmth of her own blood trailed across her palm.

“Take my left hand in yours and place your other hand atop mine on this Bible.”

She’d always been told the Douglases were oath-breakers, yet he wanted to place their hands on a Bible and as such she could honestly believe that he meant to keep this one promise to her. She drew a long breath, then settled her right hand over his and extended her left hand toward him. He wrapped his larger fingers around her smaller ones. The warmth of his blood merged with her own.

In the intimate silence he said, “I, Lachlan, solemnly swear never to harm you, Elizabeth. I will protect you and keep you all the days of my life.”

As though compelled by a force outside of herself, Elizabeth replied, “I, Elizabeth, solemnly swear never to harm you. I will honor you and keep you all the days of my life.” As soon as she said the words, a strange warmth moved though her. The pledge they offered each other somehow seemed far more binding and intimate than the marriage vows they had said only yesterday.

“Our blood oath is unbreakable. It was not given as a Douglas to a Ruthven, but as a man to a woman. Are we agreed?”

“Aye,” he echoed. “We shall both bear a scar on our palms to remind us of our promise.”