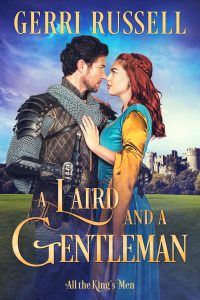 Book Four In The All The King’s Men Series

“A hint of magic, certainly lore, and a touch of the supernatural come together to create this page turner!” –Kathy, Amazon

“Ms. Russell knocks another book out of the park! As this book is absolutely phenomenal.”  –Tartan Book Reviews

“I really enjoyed the blending of romance, history and a fantastic dose of fantasy.” –Dionne, Amazon

“The characters are sure to please since both have strong loyalties as well as a code of ethics behind which they stand.” –Paula, Goodreads

“Do you truly not believe in magic?” Mariam asked.

“If I believed such blasphemy, the church would burn me as well as anyone else who claims such a thing exists in this world.”

Mariam wrapped her fingers about her repaired shell necklace, feeling it warm in her hand as it had before it was damaged. “If I am not a witch or a sorceress, then what am I? For I am not as other women.”

“Aye,” Cameron said softly. “You are not. But your mother left you a clue as to who you are. In order to find the answers we seek within the next five days, we will need to search for someone who remembers your mother. Perhaps we could learn something from them.”

Mariam smiled. “Then we won’t have to go far.”

“Mistress MacInnes told me the other night she once knew my mother.”

His gaze intensified on her. “Then let’s go find the woman and ask her a few questions.”

Mariam inhaled sharply, and instinctively she tensed. She always felt as if he were physically touching her when he looked at her in that way. The sensation of liquid heat moved through her limbs. As much as she tried to deny it, she had always been more in tune with Cameron and his moods than any other man. She sensed his eagerness to help and protect her. But was that enough.

His station as a laird would not protect either of them from accusations of witchcraft or eventual punishment. They had seen that firsthand with both her father’s ability to prick whomever he liked if they were suspected of witchcraft, and by Lachlan Douglas’s recent trial.

But it wasn’t only Lachlan’s trial that sent a shiver down her spine. There had been many trials over the past two years. And those who were accused were not the only ones put to death. Often those who defended a person suspected of witchcraft might also be swept up in the madness and be accused of sorcery themselves. “Would you risk being called a sorcerer yourself for helping me? We both saw the abuse Lachlan suffered because of my lies.”

Cameron looked away. “Aye, Lachlan suffered most horribly. A part of me is still angry that you did not step forward before he was taken into custody and tortured, but another part of me understands the pressure your father exerted over you, and the past example he set.” Cameron pushed his hand through his hair before bringing his gaze back to hers. “Lachlan survived your father’s abuse. You survived your father’s influence over you. And you and I will survive whatever it is that is altering you now.”

The trust filling his eyes sliced through her heart, weighing her down. She didn’t deserve such faith. “How can we know what is happening to me is good?” she asked hoarsely. Cameron had seen all of her rough edges over the past year. And still he wanted to help.

“Because in the past few days, you’ve proven to me you are changing for the better, that you are starting to think about how your actions affect others.”

Mariam clutched at her skirt, feeling the textured roughness of the damask between her fingers, and swallowed. “And that is evidence enough for you to let go of your anger and risk your own welfare for me?”

“That is not enough of a reason to put your own life on the line.”

“I know what is at stake.” Cameron took a deep breath. “You matter to me, and not because you are my ward.” He took her hand in his and brought it to his mouth, grazing her knuckles with his lips—a light touch that made her slightly dizzy.

Mariam stared at him, unable to tear her gaze away. “And you matter to me, and not because you are my guardian.”

He smiled as he wrapped his hand around hers. “Shall we get started then?”

A warm, tingling web spun through her as she smiled back, resigned to whatever fate had in store for the two of them. “As you wish.”