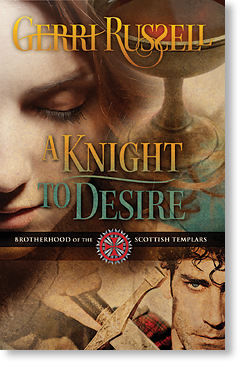 Book Three In The Brotherhood Of The Scottish Templars Series

The artifacts were legendary—the sword of Charlemagne and the Holy Grail. And now they were gone, stolen by those who hoped to use their mystical powers to destroy Scotland.

Sensuous as sin and wild as the Highlands, Sir Simon Lockhart must reclaim the treasure while protecting his fellow Templars against a madman who wants to wipe out the order and guarding his heart against a red-haired beauty whose greatest wish is to run headlong into danger.

Brianna St. Clair had trained nearly her whole life to be a knight and is haunted by premonitions of a terrible battle. It’s these very visions that Simon hopes will lead them to the treasure and the traitor. But while Brianna can wield a sword as well as any man, she has no defense against the seductive pull of… A Knight to Desire.

I love to write about women warriors. My character, Brianna Sinclair, from A Knight to Desire is a woman warrior. Her fighting skills are as sharp as any man’s. How is this possible? Women are physically weaker than men. Women cannot build muscle mass the way men can, no matter how hard they try. But women do have advantages over men. They are often more flexible and quicker to respond. My heroines use this advantage as a strength in every battle they face.

My heroines are not alone in their use of weapons. There were many real women of history who wielded swords. Joan of Arc led the French army to several important victories during the Hundred Year’s War. Boudicca of the Celts led an army in revolt during Roman occupied Britain. Fu Hao of the Shang Dynasty was a military general as well as a mother, a priestess, and Queen consort. Hua Mulan was a famous general during the Tang dynasty. Artemisia I of Caria is best remembered for her participation in the Battle of Salamis where she commanded five ships. Septima Zenobia led the Syrian army on horseback wearing full armor as she defeated the Roman legions. Tamar commanded her army to bring to heel every neighboring Muslim state. Ahhotep I was instrumental in driving the Hyskos invaders out of Egypt. Triệu Thị Trinh rode in to battle on the back of an elephant, wearing golden armor and carrying two swords as she overcame the occupying forces of the Wu Kingdom in Vietnam. And these are just a few examples of women warriors throughout history.

I hope you enjoy reading about my women warriors in the pages of my books.

A Knight to Desire from Visual Quill on Vimeo.

“A superb end to a strong saga.” — Genre Go Round Reviews

“The sweeping story of a powerful love born in the crucible of war and duty. I couldn’t put it down!” — Alexis Morgan, author of My Lady Mage, book 1 of the Warriors of the Mist

“If you love fast-paced adventure and red-hot romance A Knight to Desire is the book for you!” — Joleen James, Award-Winning Author

“Nobody writes Templar Knights like Gerri Russell! With pages full of sword-swinging adventure, sizzling romance, exciting treasure-hunting, and blood-thirsty villains, there’s no putting this book down once you start reading.” — Ann Charles, Award-Winning Author of the Deadwood Mystery Series

Brianna entered the lists and drew her sword. She held her weapon out before her and bowed to her invisible enemy. “To the death or first blood?” she asked.

Brianna gripped her sword and spun toward the voice. Simon stood not two paces away. By the light of the torches she could see him fully. “What are you doing here?”

“I could ask you the same thing. Aren’t you supposed to be sleeping, or dreaming, or having a vision or whatever it is you do to give us the information we need?”

She lowered her weapon. “I still cannot sleep. I thought a bit of practice might help tire me.” At the sight of Simon, her tension eased. Why? Did she truly find his presence comforting? Or was it that he understood the kind of pressure she was under to start them on their way.

“Would you like a true opponent, not just the air?” he asked.

She smiled. He knew her so well. A challenge would ease her mind. “If you dare,” she replied.

“I dare that and much more.”

Brianna raised her sword, waiting for Simon to draw his weapon.

Instead of drawing his sword, he walked away toward several benches along the side of the list. He strode back toward her after reaching for two long poles. He offered her what she now recognized as a quarterstaff. “I have no wish to kill you with my sword. Quarterstaffs will be safer. Put your weapon away.”

Brianna sheathed her sword before she accepted the staff. “That’s very kind of you, but you need not spare me. I can hold my own against you no matter the weapon.”

He laughed. “We shall see about that.”

Brianna glowered at the man. “I promise not to hurt you either.” She turned the staff in her hands. Finding the balance off, she strode toward a rock not too far from her and laid her staff along the edge. She drew her sword. With both hands, she brought the weapon down against the wood, taking a handbreadth from the end. She sheathed her weapon and picked up the quarterstaff once more. Another twist of the staff confirmed the weapon was the proper length and balance for her height. “Now, we battle,” she said, joining Simon in the center of the lists.

He laughed as he circled her.

Brianna kept her staff at an angle across her body just as Simon swung his quarterstaff. She misjudged the distance he could reach, knowing her mistake too late as he swept her off her feet. With a groan, she hit the ground. Her head rang from the blow resonating through her, and her eyes refused to focus. She heard a sound coming toward her. She rolled. A heartbeat later, Simon’s staff tapped the hard-packed earth where she had been seconds before.

She scrambled to her feet, grabbing her staff by one end and swung it. He held up his staff, blocking the hit, but her blow sent him stumbling back several paces. Surprise widened his eyes. “You’ve improved since we last sparred with quarterstaffs.” His mouth tightened and he came at her again.

Brianna met each swing of his quarterstaff. He was taller than she was, and his staff longer than hers, but she was quicker. That was her advantage, and she used it.

Round and round they went, striking and feinting. She watched Simon’s hands closely, gauging his next move. But he moved to strike high, then instead went low, knocking her off her feet when he scooped the staff around and it hit the back of her knees. She hit the ground hard.

As he leapt forward to press the staff to her throat, she raised her staff and caught him in the belly. She pushed hard, forcing him to her left. Using one end, she swung, striking him in the chest this time. He fell. From the ground, she shifted her hands and mimicked his move, slashing the quarterstaff against the back of his legs when he struggled to stand. She rolled away from him as he hit the ground with a thud.

Jumping up, she readied herself for the next attack, but Simon remained on the ground with his eyes closed. She inched toward him. Wary of being tricked, she reached out with her staff and poked him. He did not move. She batted his quarterstaff away from his right hand and lifted the appendage. It fell back to the ground lifeless.

“Simon?” She drifted closer. “Simon, did I hurt you?” She leaned down. His hands shot up and grasped her arms.

He pulled her down hard against his chest. Her staff fell and came to rest just out of arm’s reach. His gaze narrowed on her face. “It is unique to find a woman who can wield a sword and a staff as well as any man.”

“I practiced as often as you do,” she replied coolly.

“You are a decent warrior…for a woman.” His grip lessened enough for her to roll away from him. She gained her feet.

Brianna snapped up her staff and curled her fingers around the solid wood. “Does it give you solace to believe my skills are inferior to yours when both of us know—”

Simon was on his feet in a heartbeat. He grasped the staff on either side of her hands. He raised it with one quick motion to rest beneath her chin. He brought his face forward until he was only a handbreadth from her.

She tried to shove the staff down, but he was too strong. She took a step back. He matched it. She edged to the left. He followed. He kept the distance between them the same no matter what she did to try to avoid him. Finally, he pushed her back until the stone of the castle stopped their progression.

She lifted her chin and met his suddenly fiery gaze. “Remember it was you who challenged me.”

He brought his face closer. “Because I want you to understand you are a good warrior, but even good warriors have their weaknesses. De la Roche will find what yours is and use it against you. So be forewarned and be prepared.”

“I have no weakness.”

He lowered the staff to her chest and stepped even closer. She hardly dared to breathe as she became aware of every hard angle of him against her. His muscular legs pressed against her skirt and she felt the force of his breathing move the rigid bulk of his chest against the softness of her own.

His gaze dropped from her eyes to her lips a moment before his mouth clamped over hers. At first there was anger in his kiss. She tried to turn her head away, but found she physically could not. He jerked the staff out of her hands and tossed it aside while his lips continued their punishing exploration.

She brought her hands up to press against his chest and tried to stamp on his foot. But he shifted his threatened appendage to the left and pulled her closer. A soft groan escaped his lips. She used his momentary distraction and tried again. She stomped down hard.

He broke the kiss and muttered a curse. His hold lessened and she twisted out of his grasp. She dove for her staff. He followed and grabbed her arm. He spun her to face him. “That wasn’t very ladylike.”

“There’s no need to insult me.” She brought her elbow up against his thumb, breaking his hold. She grabbed his shoulders before he could recover and gave a half turn. Simon flipped easily over her hip and hit the ground for a second time that night. He groaned, closed his eyes and did not move.

This time she kept her distance. She would not fall for that trick twice. “Get up and dust yourself off like a man.”

His eyes snapped open. “How did you do that?”

“I attacked your thumb. It is weaker than any other finger. Putting the right amount of pressure on it will easily break a stronger hold, allowing me to escape.”

He rose to his elbows and glared at her. “Why did you attack me?”

He sat up. “You could have just said no.”

“You didn’t give me a chance.”