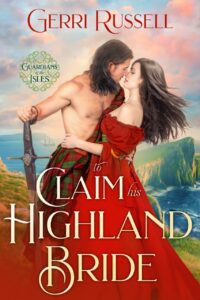 To Claim His Highland Bride

Destiny claims they are mortal enemies, but their hearts say otherwise.

When Rowena MacLeod falls in love with the son of her family’s greatest enemy, her laird brother refuses to grant her hand in marriage until Marcus MacDonald can provide for his sister. Marcus, now penniless after being disowned by his clan, sets sail to seek his fortune as a privateer. Rowena waits faithfully for her beloved, but on the day Marcus returns, she’s kidnapped by a vengeful MacDonald.

Marcus lost many men while seeking his fortune, and he’s determined to make amends by sharing his wealth with their families. Believing he can now no longer marry, Marcus refuses to pay Rowena’s ransom, instead offering to take his cousin to Uamh Oir, the Cave of Gold, and relinquish any treasure found. When Rowena escapes, she insists Marcus marry her and take her aboard his ship. With their plunder, she’ll make a new life for herself far from him and her family—provided they don’t consummate their marriage.

As danger surrounds Marcus and Rowena, can they resist the love and desire that’ve been tangled up in family duty and betrayal? 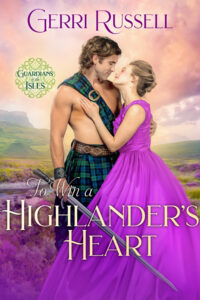 To Win a Highlander’s Heart

It’s impossible to defy destiny…
Orrick MacLeod is a famed Highland warrior from a powerful clan who can no longer fight. Painful memories from battles plague him when he raises his sword, and he fears that one day he’ll hesitate and he, or one of his brothers, will perish. Leaving his castle to thwart his battle hero destiny, he stumbles across a young woman. Rumors whisper she’s born of fairies, but Orrick only sees a beautiful woman in jeopardy. Isolde Nicolson is a devoted daughter of her clan, but when she rejected her chieftain brother’s choice of a cruel husband by striking her brother with an arrow, she’s banished. The kindly Orrick shelters her in the safety of the MacLeod castle where they soon unlock hidden desires. Orrick wishes to ask for her hand in marriage, but as he tries to do what’s right, everything goes wrong.
As an incident threatens to tear the MacLeod family apart, a pivotal and bloody battle between English and Scottish forces ensues. Soon the warrior who can no longer fight must stand to protect everything he holds dear.
Available Now! 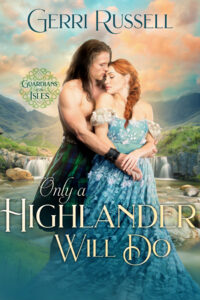 Only a Highlander Will Do

Enemies and lovers are but two edges of the same blade…

Tormod MacLeod vows revenge on the MacDonalds, who brought war to his clan’s doorstep. Gathering a company of men to attack the MacDonald home, Tormod discovers a beautiful red-haired lass being taken to marry Garrick MacDonald, the clan’s heir. Tormod kidnaps the fiery beauty to be his own bride—and to torment her dastardly fiancé.

Fiona Fraser is forced to leave everything familiar when her father pledges her to a man she’s never met. But before she can meet her groom, whose cruel reputation precedes him, she’s taken hostage by a vengeful Highland rogue. Fiona’s given three days to decide her fate—marry the imposing soldier who imprisons her but ignites her passion, or choose a different MacLeod.

When Fiona hears her father is a hostage, and the MacLeods have breached the barrier between the human and fairy worlds, she’s forced to make a terrible choice to save her people and home. Can Fiona and Tormod put aside their family bonds and clan loyalty for the love they feel for each other?